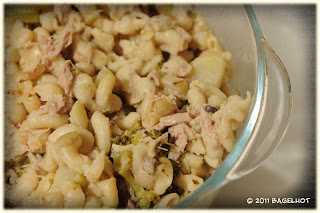 Last night I made a tuna casserole based on a recipe that I picked up in college. (Translation: It's fast and simple.) You can use whatever cheese you like. For today's ensemble I used Oka cheese from Quebec. I picked some up at the cheese store the other day. Last time I made this dish I used holandia, before that cheddar. If you're lactose intolerant you can forgo the cheese altogether. 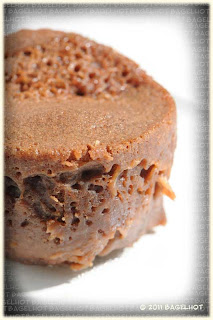 It's a far cry from one of those little cakes that your cousin made for you as a kid using a device that harnesses the immense power of a 100 watt light bulb but it is quicker. It's the microwavable chocolate mug brownie and there's a recipe floating around the ether of the internet.

One of my facebook friends had a scanned image of the directions on making this concoction. Was it real, would it taste okay, would it even be edible? Thanks to me, the "I'll try any food at least once guinea pig", this blog entry will not only tell you how to make one yourself but will then rate this uber quick dessert.

Note: if the ingredients aren't mixed thoroughly there will be a bunch of crud on the bottom of the mug. To get around this you can mix the ingredients in a separate small bowl then pour into mug.

I would describe the resulting food as a dense chocolate sponge cake rather than a brownie. For the time it takes to make the "brownie", under 10 minutes if you have all the ingredients, it's not bad. Overall I would rate this as awesome college food right up there with instant cake mix. Not terribly great but not bad if you're in a rush to make something to squash a cake fix. With the world going GREEN is it even possible to get a 100watt light bulb anymore?
Posted by BagelHot at 9:57 PM No comments:

This is not a drill... It's a fire alarm 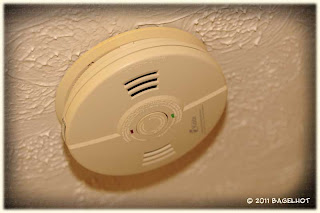 I woke up to a fire alarm. More precisely to the fire alarm right outside my bedroom door. It wasn't so much the loud, prolonged, ear piercing beep that got me out of bed. It did wake me up. What got me out of bed was that I couldn't understand what the artificial voice from the fire device was saying. I thought I heard "blah battery blah blah".

It took about 10 times listening to the garbled message at one minute repeating intervals to make me so perplexed that I got up out of bed to investigate. It should be noted that at no point did I make out the fire alarm saying "Fire" or "carbon monoxide".

Closer I just heard a louder "blah blah blah blah". I didn't even hear the word "battery" any more, just a shrill, annoying, loud (bordering on making your ears bleed) beep and some unintelligible voice. I was still tired from the party and the bus trip ride home from Hamilton, and watching the Merlin marathon I PVRed the day before. I was up until the sun came up. I'm guessing around 7am? Being 11:00am, it meant I had about four hours of snooze time.

We had a problem like this in the apartment went I first moved in. There is a fire alarm in the downstairs basement that had a low battery and it triggered the sound system the same way. My tired brain figured I'd go out and get a replacement battery since I didn't see or smell smoke.

I got dressed, went out to the grocery store (about a 15 minute walk both ways). Bought a couple of 9 volt batteries, some eggs, some sesame seed oil and soy sauce (it was on sale). Got back home, replaced the old 9 volt battery in the fire alarm, then went back to sleep.

That was pretty much my day as I slept until about 6pm. It turns out the fire alarm was saying "Low Battery... blah blah". The "blah blah" was in French "Pile something or other". My question is this. Why can't the device have a softer voice for changing the battery? Like the Majel Barret Star Trek computer voice would be nice. "Battery levels are low, please change batteries." Do you really have to be waken up to a noise akin to a piglet caught in a blender?
Posted by BagelHot at 11:00 AM 1 comment: 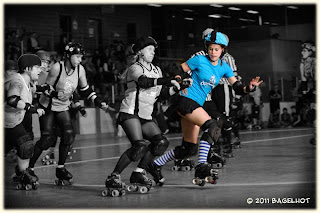 Waiting between cheques would be an understatement today. I haven't worked in the last month. Partially due to December being a slow month and partially due to a guy booking me three times to cancel at the last minute three times. Aggravating. Not only did I not work on the three days booked for those particular jobs but I also turned down work, photo work on those same days. Note to self: ask for a non-refundable deposit up front when dealing with this person.

I managed to scrape together enough money from the magical change filled piggy bank to afford a GO bus ticket to get to Hamilton. The girls of Hammer City would reimburse me when I arrived. That was nice.

The rest of the money I had from the pig I spent on making prints of the skaters retiring this year. There's four of them. I managed to have just enough to cover the four prints. (The pig works it's magic once again). 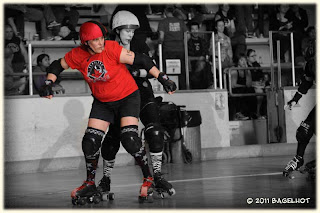 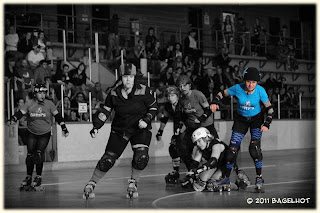 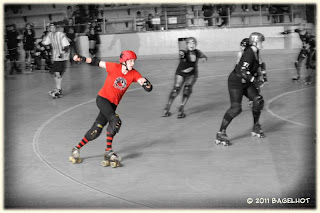 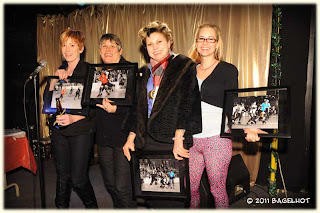 It's times like this where I kind of wished I had all the skaters photos indexed to pick them out at a moments notice. I have a vague idea of where some of them are but I rely on this blog to remind me when I've taken those photos. Perhaps this is where I'll change things around a bit this year now that I have the photo store and all. 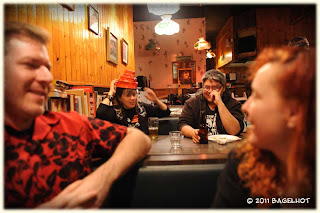 The party was a lot of fun. This is the norm when attending a party with Hammer City. As like all of their past parties it's always a sad affair when you have to leave before it's over. Adam and I had to catch the last bus to Toronto. 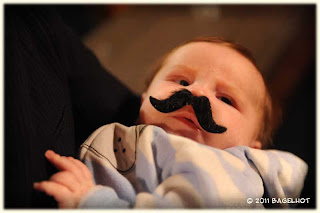 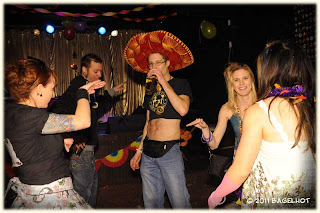 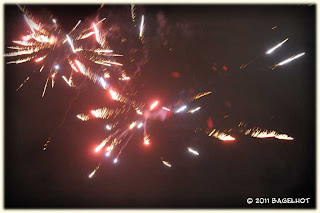 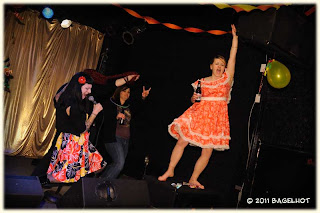 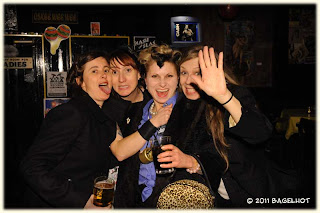 We bumped into Candy at the bus stop. She had left quite a bit earlier but missed a bus, then forgot her mittens in some public bathroom. Things weren't going very well for her and she was a bit sloshed from the party. She had a determination to walk home but Adam and I insisted on getting her home by transit. We stuffed a token into her hand and made sure she got on and off the TTC subway. 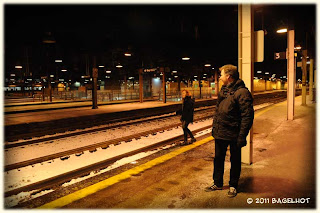 Candy stumbles onto the train tracks 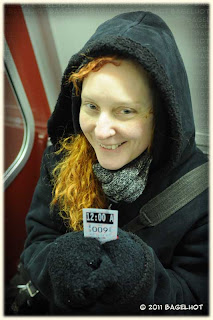 Candy clamps onto a transfer 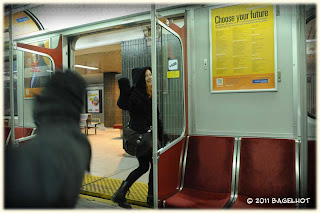 Today was a long day. I only had an hour worth of sleep. After waking up from the "power nap" I decided I'd stay awake for the rest of the day to get my sleep schedule back to normal. Waking up at 9-10am then falling asleep somewhere around midnight-2am? This sounded like a good idea at the time but as the day dragged on being awake became more of a challenge. 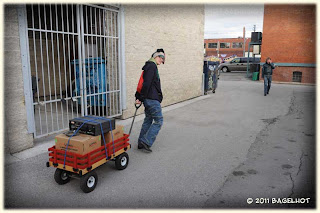 Two boxes down only eight to go.

In the afternoon I helped Robin move the first instalment of my laserdisc collection to her house. She had a wagon and we could only wheel two boxes of the ten in one go. Her apartment has three flights of stairs. Lugging up the boxes proved incredibly taxing. By the time I brought one of the boxes up I was wheezing like a heavy smoker. I'll really have to look into exercising more. It was truly a sad display of human under achievement to say the least. 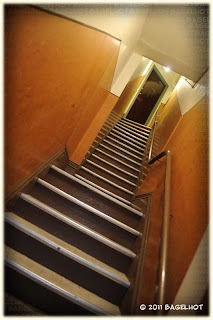 After the move I found that just walking around was a lot of effort. I had to concentrate to make sure I wasn't wobbling. It was the lack of sleep kicking in, my eye lids were getting heavy. We ate lunch at xelua, then went to the Dufferin mall. Robin wanted to look for Christmas stuff on sale at the dollar store. On her list were miniature houses and knick knacks to make a mini Christmas town setting for her train set.

By this point I could have fallen asleep standing up. I almost did. I was leaning next to a column while waiting for Robin to scope out a sock store. I closed my eyes for a second and caught myself falling over.

The cold walk home didn't help either. I didn't notice my jacket wasn't done up until about 10 minutes into walking home. I managed to stay awake until 11pm doing data backups then turned off the phone and fell asleep.
Posted by BagelHot at 11:25 AM No comments: 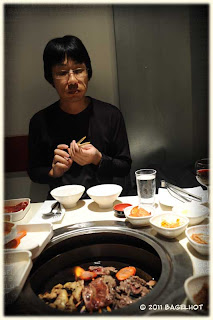 I met up today with my cousin Dave to grab food at the all you can eat Korean BBQ. It was good to get outside. Being sick over the Christmas holidays turned me into a recluse. Since I was being 'dragged' outside the house anyway I figured I'd drop off the Star Wars Definitive LaserDisc Collection over at William's. He had expressed interest in the Star Wars box set when I first started blabbing about the possibility of getting rid of my collection.

The few buyers that I had talked to were only interested in a few titles and out of that few they didn't offer much. Not that I was expecting a high resale value but at least a buck a disc. I didn't want to have just the crappy movies left with a few bucks so I ended up keeping the discs. Part of me didn't want to part with them at all. The time and effort that it took for me to find these specific LaserDisc titles was a large chunk of my life in the days of doing multimedia, visual effects and animation.

The weekly pilgrimages to Bay street video, Sam The Record Man, HMV, Tower Records, Monster Records, and the online LaserDisc mecca store Ken Crane's, to find that limited run of TRON or Seven Samurai, took some doing. I suppose like any collection a collector has put together there's the meticulous storage, the indexing, and in my case building a customized database for all the titles in my Psion 5. Like anything I suppose each title comes with a bit of history, sacrifices made to buy the "box set", and determination to collect titles before they went out of print. It's similar to listening to a song on the radio. Certain titles bring up certain memories.

I placed the S.W.D.C. on William's house stairs when he didn't answer the phone. It was like leaving a baby on the porch in the dark of the night. Sad to leave the item but happy that it would go to someone that would appreciate it.
Posted by BagelHot at 4:30 PM No comments: