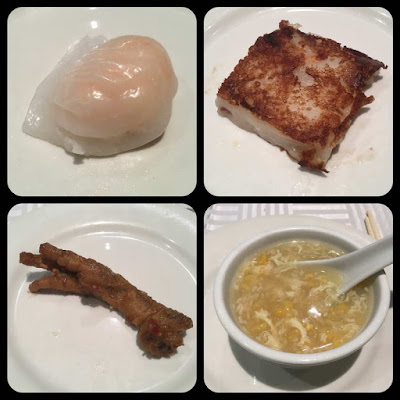 The dim sum I ordered for just me

This weekend I started out in pretty rough shape.   I had rolled into bed saturday morning at 05:30 from doing a fraturday work schedule.  We started at 15:00 on friday and worked through the night.  Side note:  I have to say that this production is great in that it offered us taxi rides home and or a hotel to sleep in.  All this for only working 14 hours.   If this is the norm in Vancouver then they totally have a one up on the film industry in Toronto.  I'd worked 16-20 hour shifts on some shows in Toronto with none of that offered.

I got out of bed feeling pretty groggy.  It was raining and overcast outside which didn't help me feel awake in anyway.   I had posted an invite mid week for some friends to meet up for dim sum at 13:00.   I never changed the time because I'd have to reset my sleep habits for the following monday and while I made it out of bed at 11:00 the cobwebs in my head continued to give me a foggy brain until at least 15:00.    The Fortune Garden restaurant was a bit pricey (maybe not by Vancouver standards) but the food was good.   I didn't order that much, some chicken corn soup, some shrimp (prawn) dumplings, radish cake and chicken feet (see photo).

If I was tired before dim sum I felt more tired after dim sum, I could almost feel the blood going from my brain to my stomach to help digest all the food I ate.  The eating took only 40 minutes in total leaving me with another hour and twenty minutes on the parking meter.  So after paying the bill and leaving a nice tip I left and waddled over to the Broadway Camera store. I was visiting to pick up a UV filter to replace the scratched one on my 70-200mm 2.8 lens.

As i walked in Peter, one of the store employees, called me by name.  "Derek, your 850 is here.  I tried to call you but had trouble with your Toronto number.".  Yes. I've only been going there for maybe six weeks and we're on a first name basis.  Sad?   Maybe, but they're quite nice...  and knowledgeable (a rare bonus in this day and age of brick and mortar shopping).

Secretly I was hoping the new camera body was in, but had come to the realization that the probability of getting the D850 in the first shipment was low, I mean I had never gotten any gear right off that bat.  I usually had to wait a few months.  (I'm still waiting on that Nintendo Switch to be released after their inital run back in March; now to the point that I don't really care any more).

I had gone around and checked other camera shops in BC and some wanted a $1000 deposit. Broadway Camera only wanted $50, they were closer to my hotel than any of the other camera stores, also Paula Kulkoskey had kind words about the store, so I put a down payment on the d850 with them.

What can i say, people not showing up for dim sum was pretty depresssing.   I'd been trying to meet up with people since I got to Vancouver (way back in July).  Shout out to Alex, who met me the first weekend, after that meeting up with friends went quickly downhill.  Also being my birthday week (technically thursday) not having anyone show up just made things feel worse.

So when i found the camera was waiting for me I had a spike of happiness for a short while.   It's been a while since I bought a camera or any pricey gadget for that matter.  It's been about 8 years since I bought my first D700.  It's crazy.

My happiness was quickly greeted by a bunch of hurdles.  My debit card maxed out at $2000.00.  Peter was pretty easy going and said they could keep the camera on hold for a few days while I got the money together.  "No!" was my reply.  I was determined to get the camera on a non-work day and fiddle with it over the weekend.

As luck would have it, a few blocks down the street was bank branch that I bank with and they were open on Saturday.  I hurried over there after telling Peter I would be back and to not give the camera away to someone else, Got the remaining money in large bills, headed back to the camera store, realized I had left my wallet at the bank, went to the bank to find that it wasn't where I left it, while waiting in line for the teller I found it stuffed in my camera bag (where it's not normally stored), walked back to the camera store, paid for the camera, a spare battery and the UV filter, then bee-lined it back to the car and drove swiftly to the hotel where I opened the box to see what I had just bought and to check if everything was there, then crashed into a dim sum coma. 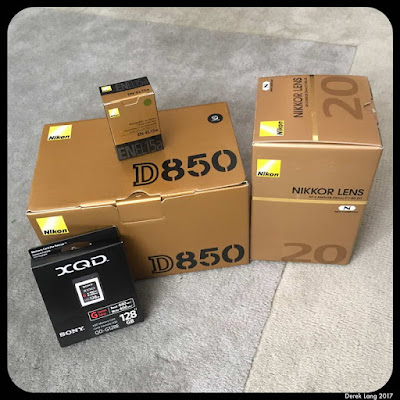 the conveted Nikon D850 plus some other things

I woke up a few hours later, downloaded the D850 manual to my iPad because my eyes are starting to have a hard time reading tiny text in tiny manuals, and started fiddling with the camera.  The first thing I noticed was that the light meter settings were reversed.  Maybe Nikon did this to make Canon users more at home?  Whatever the reason, I found it annoying.  Luckily in the menu you can flip this display so it's like the past Nikon cameras I've had.   Some of the controls moved.  My hands have gotten so used to the D700 controls that I found myself trying to push a button that wasn't there (ie.  the MODE button; where did it go?).

There were a bunch of things that have been changed or added.   The D700 never had video.  One of the things that kind of angered me when buying the D850. I don't want to do video, I just want to shoot nice photos.   But adding everything including the kitchen sink seems to be the trend, I really didn't have a choice.   Maybe one day that video feature with be useful to me.  For now that menu items and buttons are just getting in the way of me shooting stills.  I need to go over the controls in more depth,  I still don't know how to bring up the histogram.

The biggest disappointment for me with the D850 is that the bracketing only does 5 brackets at 3 stops apart.   While it's better than the 9 brackets at one stop apart (for me), it would have been nice if I could do more brackets and change the spread in 1/3 intervals.  Ideally 7 brackets at 2 1/3 stops apart.   This is the magic number for doing HDRIs with our 8mm lens when doing visual effects, going from 1/4000 of a second to 4 seconds.

If Nikon had a suggestion box on their web site, I would have requested this feature years ago but like most business web sites, the ability to actually contact anyone is either hidden or non-existent.  I tried, i gave up. Maybe Nikon will read this blog entry and fix it in a firmware upgrade?  I'd be hopeful but I doubt it.  As a result I'll probably have to also buy a Canon mark III or mark IV to conform to the rest of the visual effects industry. *insert sad trombone.

I'm still happy overall with the Nikon.  As a camera for personal use I would have still bought the Nikon just because the Nikon world is so ingrained in me.  It'll take me a few days to really get comfortable with this model.   I'll try to update the blog as I find things out.
Posted by BagelHot at 11:00 PM 1 comment:

Postcards from the Edge of the water 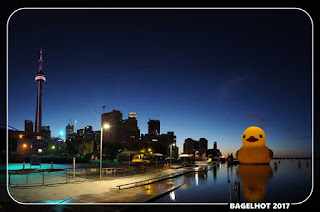 After seeing Baby Driver (a great movie by the way) with Darryl Stawychny, I got home to work on making a postcard based on an image (see above) I shot on sunday morning.  The last postcard I had made didn't do well for me financially, it was of the Hammer City Roller Girls but making it was fun and there's about 60 to 100 of those cards floating around the world.  Maybe they'll be a collectors item after I've died?

The printing service was having a 25% off sale that ended today which put a bit of fire under my ass to get stuff done.  I've been pretty terrible at being productive these last few months.  It's only been this weekend really where I thought I've been doing something creative-ish.

There's only so many episodes of the MOD squad that you can watch before you have to get off the couch and do something I guess.  You dig?  Solid.
Posted by BagelHot at 11:50 PM No comments:

The stomach says "No"

Yesterday while eating a beef soup at ravi soups, my stomach went all crazy, feeling like a had just ate glass shards.  Sharp pain ensued followed by sweating and nausea.  I managed to expunge most of the soup in a park trash can.   I haven't been able to keep anything down aince yesterday.  While the sharp pain has gone away, my stomach feels bruised.  I tried eating a 6" sub today and it lasted for maybe 30 minutes before i had it revisit in the parking lot coming back as a grey brown goo.  I wobbled back home and went to bed.
Posted by BagelHot at 12:37 AM No comments:

Woke up at 5pm.  Went down to chinatown, to xulea.   Ordered an extra large pho with a taro milkshake.   Returned home. Went back to sleep.
Posted by BagelHot at 1:21 AM No comments: 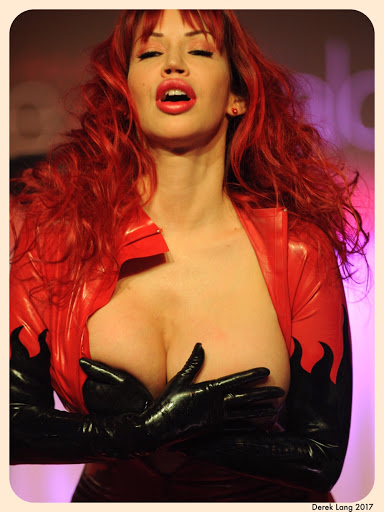 Bianca Beauchamp poses on the main stage at Toronto Sexapalooza 2017

The last few days have been pretty lack luster in that between being sick with a series of colds and waking up at weird times, I really haven't gone out to do much. The highlight has been grocery shopping and slowing sorting through my stuff from Auckland, namely my suitcase.  It's still on the floor where I left it after entering the apartment over two months ago.  It's been open, I had to dig around for a few things. Other than that it's still on the floor in the same initial place and hasn't moved.

I got a call from Gwen. She offered me a pass to this event she was working at. "Drop on by, there's lots of stuff to see." and "take some photos". At least that's what I heard in my head. I looked up the site and found that it was a camera friendly environment.  In the end it was enough to get me onto a more regular sleep schedule and make my way out to the far reaches of the Toronto Airport by transit.

Sexapalooza took place at the Toronto International Center, a large set of buildings that used to house all the great computer and car conventions back in the late 80s, early 90s.  Big conventions for Toronto anyway.
Posted by BagelHot at 3:00 PM No comments:

Posted by BagelHot at 9:29 AM No comments: