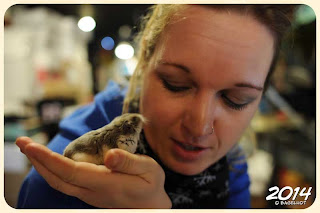 The main goal today was to go to the Lakeview to get a coconut cream pie. I was still catching up on my sleep. I slept in until about noon then forced myself to get out of bed and walk on down to the restaurant. It's about an hour to get there. With the weather being bright and sunny having to walk wasn't so bad.

In the modern age of telephones and with having past history of getting to the Lakeview and finding out they don't have pie you'd think I'd just call them in advance. You'd think that but no, I didn't call in advance and yet again was disappointed when they didn't have any coconut pie.

This forced me to try a different pie, the S'mores pie. A chocolate filling in a graham cracker crust topped with toasted mini marshmallows. The chocolate was ultra sweet, so much so that when drinking the chocolate milkshake I couldn't taste the chocolate flavor, it could have been vanilla.

The combination of the milkshake and the pie put me into a sleepy state that verged on falling into a food coma. ;To help fight off the sleep I decided to walk around. With no where in particular or direction in mind I made my way down to Queen street. ;Eventually I found myself at My Roll Life

"Did you bring your friend?", that was Gwen's way of asking if I had brought the hamster. I placed the carrier on the desk and slid out the cage revealing Fred. From there hamster hijinks ensued.
Posted by BagelHot at 5:00 PM No comments: 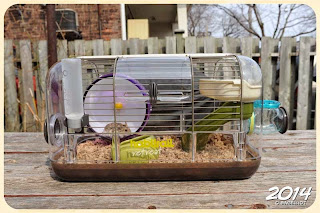 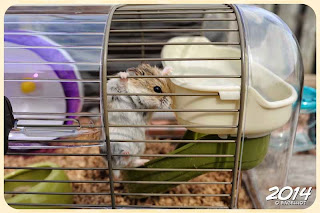 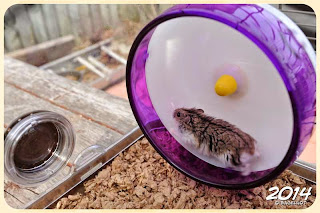 Running in the hamster wheel of life. 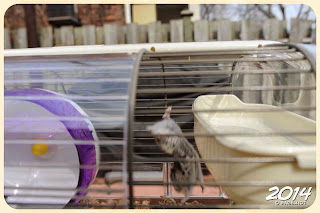 Hamsters: Not as graceful as cats
Posted by BagelHot at 6:53 PM No comments: 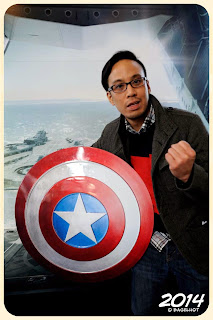 Gerard with the Captain America Sheild

These last few days I've been fighting yet another cold. This current one is fluid hovering above the lungs with lots of coughing and difficulty breathing. Our work hours and changing of the schedule have a lot to do with this as a bunch of the crew are tired and more susceptible to being ill.

Even with Saturday off, I spent most of the day sleeping, trying to shake this thing. Overdosing on vitamin C and taking it easy. My highlight was getting out and walking down to the Lakeview to gorge on a double patty burger, chocolate mint milkshake, fries, a slice of apple pie and ice cream. By the end of that I wanted to curl back up into a ball and sleep and after I walked back home that's what I did.

So that brings us to today, Sunday. I woke up around noon, I could have slept in later, I was still feeling lousy. I needed to make it down to work. It's about an hour and a half commute. I forgot Gerard's crew jacket in the truck and I was meeting up with him at 16:00 to see the new Captain America movie.

One part of my brain told me he could pick it up at work tomorrow but the other part of my brain clearly reminded me that I promised I'd do this. In the end it might not matter to Gerard as he'd get the jacket eventually but my conscious won out.

I can give thanks to my father for this "If you say you're going to do something, you do it." That was the thing about my father, he was (and still is) a man of his word. It's easy to make promises and keep them if there's not a lot of effort involved but when it becomes more like work to keep those promises that's when you can tell the character of a person.

The movie was fun. Lots of action and a bit of comedy. Overall I loved the movie. It was a nice sequel to the first movie and still managed to work it's way into the Avengers and Agents of Shield story lines.

Posted by BagelHot at 4:30 PM No comments:

Early this morning or maybe late last night, I can't remember really as I was exhausted from getting home from work, I noticed that the hamster cage needed some cleaning. This led to disassembling the soiled compartments and bringing them to the sink.

While working on TV/movie jobs I usually don't stock a lot of food for fear that it will go bad so I the food that I buy and store is a lot of food with long storage life, stuff in cans or jars for example.

While moving the hamster stuff to the sink for cleaning I noticed a jar of peanut butter tipped over among a bunch of cans. Being that person with slight OCD I went to sit it upright. That's when I noticed this... 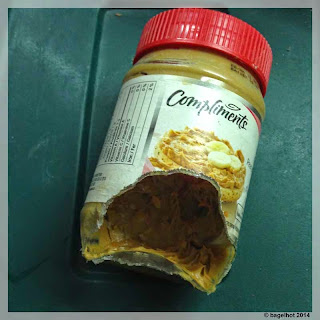 The bottom half on the side not visible to me was completely eaten away. The impressive thing was that were no particles or half eaten plastic anywhere. I wouldn't have known the peanut butter was even touched other than seeing the jar was tilted.

I was a little freaked out about this then decided to check other containers on my food storage cart. This was definitely a surgical strike. There was no evidence other than other packages having been chewed on. There was no poop. At first I wasn't entirely sure it was rats. It could have been squirrels, raccoons, or maybe even a skunk. After inspecting the peanut butter jar a bit more closely I noticed the bite marks were relatively the size that would match a rat or a squirrel. The tongue marks in the peanut butter were too big for a hamster. So much for the professor coming back. 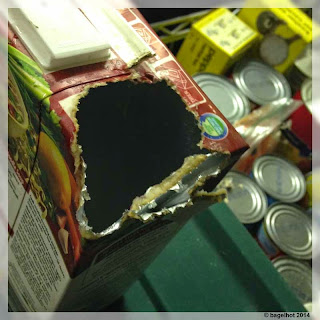 Weird that the carton of vegetable soup was not emptied of it's contents. I guess the rodent is a picky eater.
Posted by BagelHot at 12:30 AM 1 comment: