I went down to Woodford park for the festivities. They were changing the name to Jeff Healey park in honour of the Canadian musician that grew up in the area. To be honest I really didn't expect anything other than a sign with a drop cloth over it and a "Ta Da" noise to accompany it.

I wasn't even sure I knew how to get there. Were the directions I got accurate? Was Delroy drive going to be a dead end? As I got closer and the road started to dip down hill I could see people wandering around. Then noticed James in his car beeping at me. Okay If I'm lost than he's lost too. A comforting thought.

As the view opened up I noticed trucks and a stage set up. There were kids running around an inflatable playground air mattress and people sitting around the stage on the grass eating hot dogs and other foods. Even the fire department made an appearance. 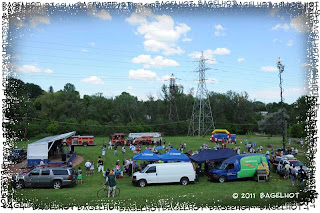 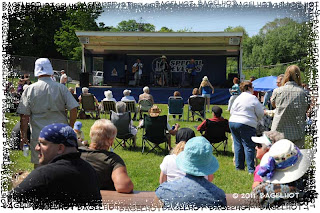 I suppose it's no wonder that musicians were at this thing. It was for Jeff Healey after all and most of the people there were his friends or in my case friends of friends. It was a nice turn out. Enough people to make it look busy but not so many people that it was hard to move around. 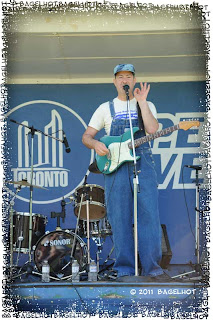 Marks got up onto the stage. The last time I saw him was at the Jeff Healey Rock tribute and until now noticed that there are no photos of him on my blog entry. This is a terrible over sight as he's quite a talented individual.

For the kids and the rest of us, he performed a rendition of "Twinkle twinkle little star" switching his sound between Bob Dylan, Johnny Cash, and himself. It was so incredible to hear. Posting in the blog with words really doesn't do him justice. 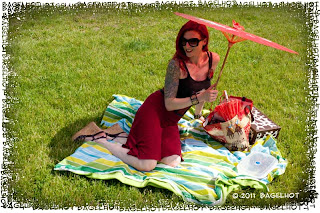 Behind me in all the chaos of kids running around with ice cream and older folks lounging in lawn chairs I noticed this strikingly attractive women dressed in red with a red umbrella. It was hard not to notice. The red on the green background jumped out at you like a sore thumb. So of course like any good photographer I had to ask if I could take a photo of her. (see above) As it turns out she runs a food company that, yes you guessed it... Cajun food (okay maybe you didn't guess it). 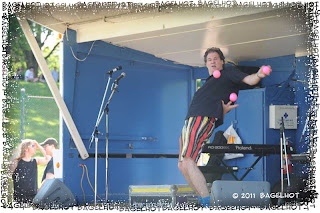 There was a point where a juggler took the stage. Juggler? Yes juggler and a funny one. Really?
As it turns out he was pretty funny (and could juggle). He got the whole park laughing. Yes, even the adults. If have an event, and it doesn't have to be a kid event, and you need entertainment... hire this guy. (www.comicjuggler.com) 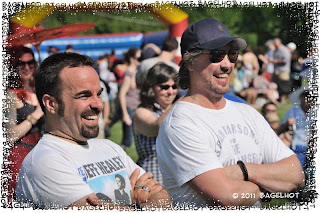 Roger and James laughing at the Juggler 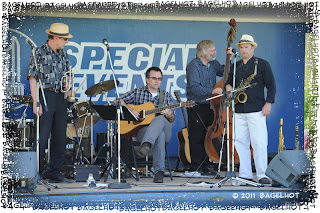 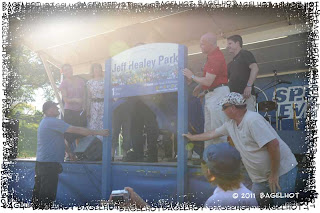 There actually was a drop cloth with a sign under it. 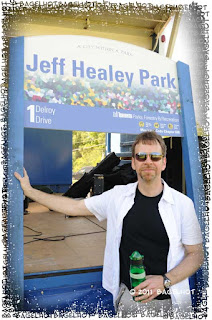 Rob Quail friend of Jeff and the brains behind the operation

Jeff Healey park would still be Woodford park had it not been for Rob. He's really the guy that spearheaded the whole thing. I'm thinking Jeff would have liked this.