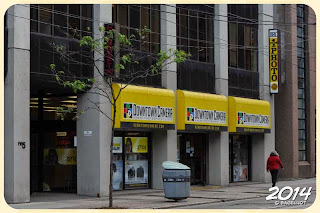 I spent the mid part of the afternoon shopping for a blimp, a case that goes around your camera and muffles the sound of the shutter. Earlier than that and I was sound asleep recovering from an exhausting week's worth of work. I suppose I could have called the stores instead of going to them but I like seeing what's new. Also I like walking around outside. In the end none of the camera stores I went to had an enclosure for my D700. The camera is four years old. So finding stuff proved to be a bit more difficult than I originally thought.

I did end up getting a cable to attach my camera to a pocket wizard transceiver, thus allowing me to trigger my camera from 2000 feet away. I'd been meaning to get one of these things for a while.
Posted by BagelHot at 3:00 PM