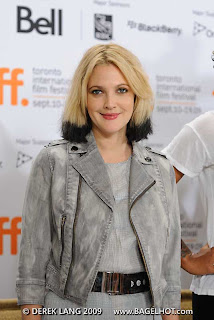 Being a photographer that lives in Toronto and photographs derby on a regular basis I was a bit disappointed that I wasn’t around to shoot one of the largest derby events, if not the largest roller skating events in Toronto during the Toronto International Film Festival. ToRD had a tie in with the launch of Whip It, a movie with Drew Barrymore, Ellen Page, Daniel Stern, among others.

I was in Detroit with Hammer City's Hawkeye and Scotty Ho photographing them scrimmage with the Detroit derby girls. Travel is always good. The Detroit venue was awesome. The Detroit girls were also pretty good about having some stranger show up and photograph them.

It just seems weird that I manage to see more derby events outside my city then within it. Photographing the Hammer city roller girls in Hamilton, going to Vegas for RollerCon, Montreal for the Beast of the East, Portland for last year’s Nationals and of course there's all the little and large towns following the Hammer City Girls playing their away games (Akron, Wilkes-Barre, Fort Wayne, Chicago, Greenville). Geez, I seem to get around.

Not photographing the Whip-It event felt like I was missing something monumental. Seeing the photos on Facebook taken by some of the people that went gave me a small glimpse to what happened. Crowded and packed. Not a big fan of crowded and packed. So I was okay with that.

As the gods of derby, the universe unfolding, fate, or God (with a capital G) would have it, that was not the end of the Whip-It experience. I received a phone call from Miss Carriage last night asking if I wanted to photograph the press conference at the Sutton Place hotel today. Seems I would be photographing Drew and Ellen after all. 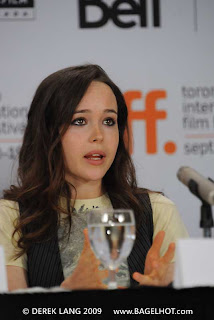 Ellen Page (Bliss Cavendar) talks about the difficulty of skating on a banked track.

We started filing into the press room on the second floor at about 10:50. Drew and the rest of the cast wouldn’t be in the room until 11:30. A line of videographers were spread out across the back room. There were also some photographers clumped at the front right of the room next to the place where the cast would be giving speeches.

The photographers around me were pretty great. Making sure we all had enough room to get our shot. Before long the cast came out. Drew’s place card was conveniently located right in front of us.

I’m always impressed at what actors have to go through. For about a minute or two, Drew was bombarded with camera flashes and photographers asking her to face a certain direction “This way Drew”, “Over here Drew”, “Hey Drew”. Only one guy managed to get a Please and Thank You in. He was from L.A. Just because it’s our jobs as photographers to get images of the celebrities doesn’t mean we should chuck our manners out the window. The photographer from L.A. impressed me. 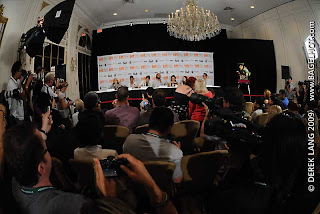 Then the discussion panel began. While talking about filming of the movie one reporter kept firing her arm up in the air to ask a question. As we hadn't gotten to the Q&A portion of the talk this became annoying. I could imagine the videographers shooting daggers out of their eyes as her arm came up into their frame getting in the way of any good footage they might have been getting.

When the room was opened up for Q&A this reporter was asked to speak. She asked Drew how she felt about the death of Patrick Swayze. That was her burning question. I was in awe at the distasteful question being put forth. Unless Swayze was part of the cast, and he wasn't, a movie discussion should not be the time or place to bring something like this up. I was floored.

At the same time I was quite impressed by Drew's response given that she had just heard of his death from this reporter (way to go reporter). 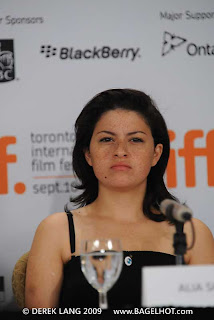 A second reporter was recognized to ask his question. He started off by talking about Donnie Darko and then flew into "How do you feel about Patrick Swayze's death?". I thought "Didn't you listen to her previous answer? You a**h*le!". I said the last word out loud. At least loud enough for Miss Carriage, who was seated next to me, to hear. I think she responded with something like "you could derby check him". It's possible that that's what I thought I heard. She probably said "Holy cow" or some phrase with less violence involved.

I mean really, what do these reporters expect to hear? "He was a guy with bad breath?", "He was the father of my secret child.", "He had a thing for going to bars after filming Road House". I realize that sensationalism does sell newspapers but can't we leave that crap for the rag magazines? What happened to real journalism and integrity? As I type this I realize I'm sounding pretty naive.

Later on in the day I was checking out a lot of the local online newspapers about their take on the press conference. Most of them decided to focus on the unfortunate death of Patrick Swayze and didn't print anything about the movie at all. Bunch of jerks.

I did manage to find one article that was worth posting a link to. I have to commend the writer of the National Post, Brad Frenette, for writing such a great review of the press conference by passing on the Patrick Swayze comments and sticking to the discussion about the movie making and the cast. You can read his article here (http://www.nationalpost.com/arts/toronto-film-festival/story.html?id=1996754). 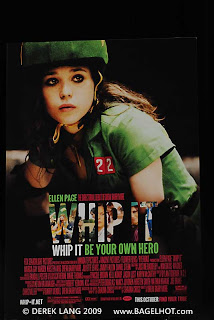 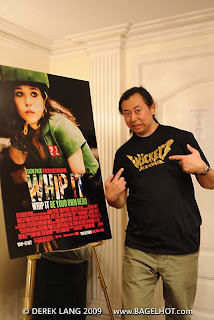 Me with my new Wicked Skatewear T-shirt 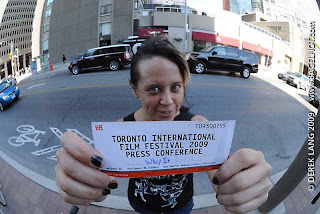 Miss Carriage holds up one of our press passes