Hands of Horror, Feet of Death 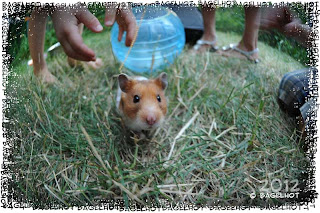 "What place of hell have you brought me to?"

While on the way to the bank with Captain Hill, I realize this sounds odd, taking the hamster out to the bank. I suppose this requires some explanation. The hamster has been in the cage for some time. I suppose I was thinking she needed some air or something in the way of a change from the ordinary everyday scenery that she gets from being in her cage.  I needed to go to the bank.  This brings us to bringing the hamster along for the ride.

Being put into a smaller cage and then into a shopping bag probably isn't much in the way of scenery. Hamsters have poor eyesight though. So being in a bag might not be that bad, at least the hamster would get to experience the different smells from the outside world. As I write this I'm reminded of the oversized lady we walked by wearing some cheap smelling perfume that she bathed in. I winced as we passed her. Hamsters with an acute sense of smell... well I'm sure that Captain Hill didn't enjoy that particular moment in time. 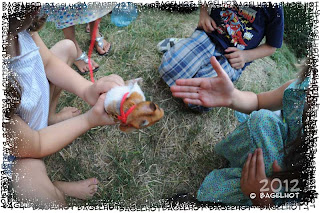 "Hold gently, Do NOT squeeze!"

Anyhooo... while making our way to the bank we were met by William and Irmena with their two kids. They were going to a neighbourhood open house "Welcome to the neighbourhood" party. It was a get together to meet people in the surrounding area hosted by some folks just a few blocks from where we were standing.  They invited me to tag along.  I think they might have also mentioned free food.


Within ten minutes we were in the backyard of someone's house. I noticed that there were a lot of kids and everyone that were considered adults were coupled. Spotlight on the single creepy guy with the hamster.  Thank goodness I don't live in a dark basement.  Oh wait, I do.  Creepy.

Since Asha and Finn, William and Irmena's kids, already knew Captain Hill was in the bag there wasn't much point in trying to conceal the hamster from the other kids. There were a ton of kids.  Luckily there were only a few kids that noticed the others were busy playing on the swings or playing tag further off in the yard. The kids that did notice the hamster were more than enough.  I'm sure to Captain Hill  there were enough of them to freak her out. I let the hamster out of the cage and onto the ground so Asha could have a better look at her.  Next thing you know there's a swarm of little hands flailing out to touch Captain Hill.

Kids, human kids, are small, uncoordinated for the most part, are attracted to small furry animals and also have a very short attention span.  This makes for a dangerous combination.  Not knowing hold to hold a hamster properly could be very uncomfortable.  Despite trying to teach them how to hold the hamster properly there was still that one kid that went to hold Captain Hill like a toothpaste tube. 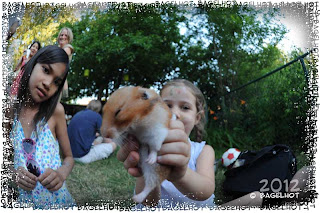 There was one girl that held the hamster in a weird way.  The correct way to hold a small creature is to have one hand underneath to hold it's weight, the other hand to cover the animal so it doesn't fall (or leap away).  Despite the two hands clutching the hamster Captain Hill looked like she was falling asleep...  that or the oxygen was being squished out of her.  I couldn't tell.

I placed her back in the cage in the bag.  The kids had started running around the yard.  I was afraid she would get stepped on.  Kids are like chickens with their heads cut off.  Running around, not looking where they were going.  It was all pretty nutty. 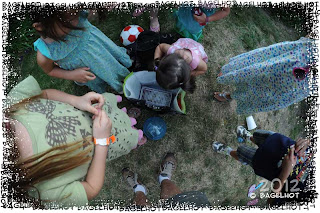 One of the kids looks in the bag to see if Captain Hill is doing okay.

Eventually I left the party and made it to the bank.
Posted by BagelHot at 6:00 PM