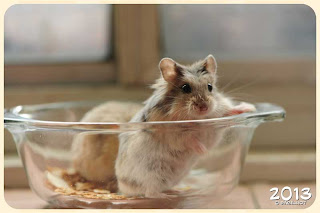 The Professor in a bowl lit by the sun

I've recently noticed my apartment gets only about 10 minutes of really bright light during the day. I think it's a seasonal thing as I don't remember that much light coming in before. It's also possible I just slept through it with the wonky hours I've had due to my sleep cycle or maybe I wasn't in the apartment at all (eg. At work, outside, or maybe even in another country).

Most of the light gets blocked by a large tree outside the house for most of the day. Today however there was so much light coming in from the window that I could have been outside. I thought it would be cool to build a miniature model with a stick and a magnifying glass as a nod to Raiders of the Lost Ark. Maybe this might be a bit unpractical. As my apartment is small perhaps instead of a model of a tiny city a rotating disco ball should be installed? That's fun. It's amazing the stuff you can come up with when you're half asleep.

In the end I put the hamsters in a small bowl and placed them on the window sill to take photos of them. Previously I had been taking photos of the hamsters using flashes and my studio strobes having them "pose" on a white seamless background. While the photos have been turning out okay I think the flashes terrify the hamsters, one of them at least. With Peppy there seems to be a direct correlation between the flash going off and poop being expelled. The Professor doesn't seem to be affected.

Lit by consistent light they seem fine and wander around more leisurely. I'll have to take them outside when the weather gets warmer.