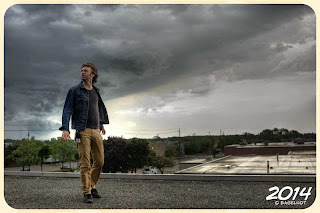 On the way to Joe's car to grab some work gear from the trunk, I noticed the crazy cloud formation in the sky. I commented saying that I should have my camera to photograph it. Joe then blurted "Get your camera". It didn't take much convincing, I ran back inside grabbed my Nikon, ran back out, then started framing the sky to take some photos.

"Ugh, the trees are in the way", I said while looking for a nice opening.

"Why don't you go up onto the roof?" remarked Joe.

"The ladder is right there".

Moments later we were on the roof. I took a few photos of the storm heading toward us. I also managed to take some photos of Joe in the foreground. To be honest he was standing in the way of my stormy cloud photo taking so I figured I'd just include him in the shot rather than trying to crop him out in camera and have to go through the effort of changing my position on the roof. It was then that I started to shout out directions of standing still to pose, turn that way, turn this way. It became an impromptu mini photo shoot.

The photo shoot ended when we started to get pelted by big blobs of rain drops followed shortly by the sounds of thunder in the distance. "Okay, time to leave." and we rushed back down off the building and back inside. I never did get my gear from the car at that time.
Posted by BagelHot at 6:48 PM