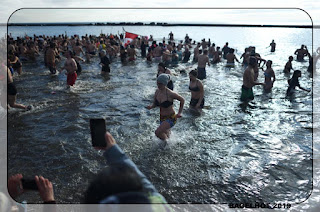 Why anyone would want to jump into a lake when the outside temperature is under 0 degrees beats me. Just getting out of a nice warm bed on an early January 1st was a painful hurdle. Perhaps the shock to the system would rev you up for the rest of the entire year? I decided to get out of that nice warm, cozy cocoon, and venture forth outside.

I thought to myself "It's good to socialize, letting people, friends, know you're still alive. When it gets busy during the rest of the year you won't see anyone.".  That's a hard truth. Having friends takes effort.

Showing up to something when you have nothing else planned is not a hard thing to do.  You just have to get out there.  If you're under the weather or injured it might start to become a Herculean task but I was neither.  Maybe getting over a bit of food poisoning but that was really more of a yesterday thing.  Out to the beach I went.

There was the usual contingent of photographer friends.  Paul, Victoria, some others that I've met sporadically over the years. The event took place at noon.  We showed up around 11:00.  Basically people run into the water and then come running out.  It really doesn't take that much time.  Maybe 5 or 10 minutes max.  After photographing what we could we would then meet up at a pub somewhere and catch up.

If interested in going on a photo walk in Toronto you can check out their page...
Toronto Photo Walks
Posted by BagelHot at 3:00 PM