Steve in the Fiat 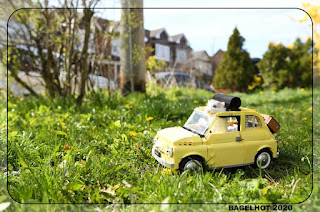 
Woke up super early today 5:00am.  To get outside to do a small photo shoot across the street before the sun came up. I had just received the fiat500 model car by LEGO.   I spent yesterday, roughly seven hours assembling it.   It turns out it’s hamster scale.  So today I would take Steve out and work the camera.   It’s been awhile. I wasn't really that happy with the photos.  It was too dark.  If I left the shutter open any longer Steve would be blurry, or I'd lose depth of field had I changed the F-stop.

I did another shoot in the afternoon in the front yard.   With this lock down, quarantine in place there’s not a lot of places to go.   So I have limited options.   While shooting Steve in the front yard, I lost a piece of LEGO of the car.   Being yellow it blended in with all the grass and dandelions.   The OCD part of me was cursing inside.  But luckily it’s not my first missing a piece of LEGO rodeo.   Because the set is from this year, and new, it would mean that replacement parts could be ordered from the LEGO site.  No problem.   No stress.   Just log in and order another piece.

The stress levels sprang back up as I logged in and realized that LEGO is still under quarantine operation.   I already have two emails that are in a queue in which they never got back to me on their, I’m guessing, smaller staff.   Turns out that the LEGO company has shut down the Canadian part replacement service.  Ugh!

The American service was still open so I thought I’d just run the part number through the database to see if it was even in stock.   It was, and could be mine for the cost of 15 cents (US) and shipping.   As they probably don’t ship to Canada, I mean that’s what the Canadian store is for, I would have to ship it to a friend in the USA and then have them ship it to me.   While doable I thought maybe I’d sleep on it.

All kinds of scenarios popped up in my dreads about that stupid brick.   Maybe it got flung out of the bag I was carrying it in from the wind, or maybe the hamster grabbed it as a trophy and hit it inside it’s sleep pod to snuggle over, or maybe it flew out under a clump of grass, near a rock, maybe a crow took it after that to reward a small child.  I woke up, by this time it was around 12:30am.  Put on the pants, and went outside with a flashlight.   I figured it would be easier to find a piece of plastic at night because the flashlight would reflect differently on the plastic object than on the grass.

In less than a minute I had found it.   It was sitting right under where I would have been photographing from.  The yellow piece of plastic stuck out like a sore thumb.   I went back inside and placed it back on the car model not allowing for chance to have me lose it again but in the apartment.

I went back to sleep.