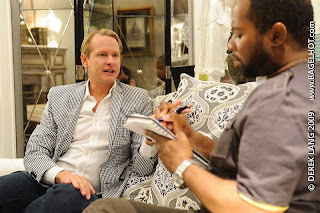 Today's FAB adventure took me to Teatro Verde, a store that sells high end furniture and interior decorations. It was here that the Fashion Editor of Fab magazine, Max Macdonald, would interview Carson Kressley. I would tag along and take photos.

It was because of this interview that I was reminded to return a book I borrowed from Ted. The book title is "Off the Cuff: The essential style guide for men and the women that love them". The author, Carson Kressley. Yep, the same guy being interviewed.

I've had the book for quite a while now. Over a year. Maybe two. It got packed up when I moved. I lost track of it for a while until it resurfaced when I was looking for my Joy of Cooking book. It is now sitting on a shelf waiting to be returned. It's been sitting there for at least a year. I might re-read it, not only because I really need help with the clothing myself bit but I remember the book being quite humorous. Meeting the author in real life you realize that the book is quite reflective of his real personality. Carson is that funny, witty, and entertaining.

Even though Ted said I could take my time reading the book I don't think he meant a year or more. I have successfully become one of those bastards that don't return things. I hate those people. Not returning things in a timely fashion is right up there with talking in the movie theatre, or blabbing on the cell phone on public transit. Who raises these inconsiderate people who only think of themselves? Can't pin the blame on the parents, this time it's 100% me.

I suppose there are worse offenders. Those would be the people that return the stuff they borrowed in worse shape than they borrowed it. Personally I've had stuff return in bad shape. The borrower generally doesn't offer to repair or replace the item either. Scum! I find this consistant with destroying your stuff. They just don't care.

I put these people on the "never lend anything to these people ever again" list. Maybe if they offered to put up a deposit I might give them a second chance. That or I don't care what happens to the item being lent out. I swear I have "friends" that could destroy an anvil if I had one to lend.

Things I've lent out that came back in worse condition
End of rant.
Posted by BagelHot at 11:00 AM

You lent us the complete Josh Weadon collection and not only did we return it but had cleaned some of the DVDs that didn't play. It's not all bad :-)