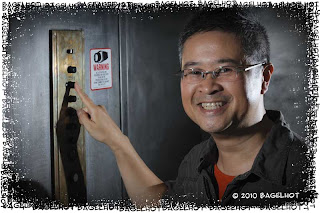 Going up? With motivation from Emmanuel you bet you are.

The creative spark is one of those things that pops up when one least expects it. At least for me. Something usually has to trigger it, be it a conversation, or some experience. It's rare for something to just pop in out of the blue. It's because of this that I'll force myself to go outside for just the sake of going out and doing something.

I was in one of those modes today. Driven myself home earlier this morning from Hamilton. It was an unexpected drive. I drove and dropped off a drunk (maybe half drunk) skater friend to her home. By the time I got to my apartment and fell asleep it was around 5:30am, some time just before the sun came up.

Waking up to a phone call at 10:30am had me cloudy brained all day. I had suggested to Emmanuel that we do a photo shoot a few days earlier. It was to test put some lighting techniques I'd been toying around with in my mind over the last few week or so. Originally I told him I'd be available in the afternoon. I wasn't expecting to be back from Hamilton until 2pm and I really wasn't expecting him to call so early in the morning. 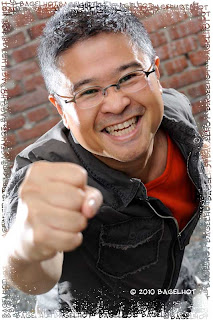 As a general rule though I tell people to just not call me before 10am. Then I'm not just cloudy brained, I'm crusty all day. 10:30 was fine but I still have errands to do and I told him I'd get back to him by 2:00, the originally planned time.

2:00pm. We set up to meet at his apartment and from there we went to the back of the building to do some photography. It didn't take long for the photo shoot to become fun. We ended up doing some Super Hero type poses and shots. I even tried making the lighting a bit more dramatic. In the end got some pretty cool photos.

Force yourself to get out there and just do something. That'll get you 80% there, just showing up.
Posted by BagelHot at 2:00 PM