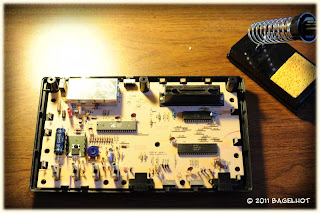 Earlier on today while at the Dufferin mall I picked up some solder. It was so I could fix Cheryl's Genesis. Some of the joystick contacts had worn off due to the way the inputs were soldered onto the motherboard.

The fix was pretty easy. All you had to do was reconnect the contacts. About 10 minutes later I was done. Although after playing the various cartridges, like Yar's Revenge, I realized how ancient the games were.

To remedy this I plugged in my Super Nintendo and played a few minutes of Choplifter III.
Posted by BagelHot at 5:31 PM