Making the most of a short day 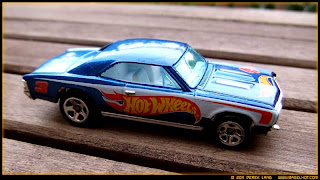 Work today started at 07:00 but as luck would have it I finished early, getting out two and a half hours later. This is a very rare occurrence and before you get all jealous when I tell you I get paid for a minimum of eight hours even if I clock in less hours, know that I also put in a large number of hours on my own time that are unpaid for. Today things just worked out in my favour, a nice change.

Ever since the trip to the Bass Pro Shop I've been looking at how things are marketed and brainwashed into kids brains so when they become adults they're already conditioned to buy the bigger priced "real" items. With the Honda Indy having just gone by I thought I'd like to look into toy cars.

I ended up at Zellers and picked up a toy car for $1.50. Partially to do a macro camera test and partially to own the tiny toy car. This is how things collect into giant piles of stuff that no one wants to help me move. I think there's a disorder there some where. We can call it "Packraticus Alotus".

There's a nostalgia that comes with the toy car purchase. When visiting my grandmother's (when I was much younger), my cousin Lance would help me set up a giant orange track that would go down stairs, do a loop de loop, run the length of the living room, then head back towards us at the bottom of the stair case.

I don't have a track but the car is fun to photograph.

This blog entry isn't all that interesting, I know. Since the backlog of photo editing from the Beast of the East I really haven't been able to catch up. Luckily blogspot allows for older entries to be typed in later (or in my past history not at all). I figured I'd start typing something. Maybe something interesting will happen in the next few days and we'll be current.

Anyhoo... if anything this blog entry means I'm still alive and doing stuff. Boring stuff maybe but stuff none the less.
Posted by BagelHot at 10:30 AM