London and the grilled cheese sandwich

Today involved a lot of travel prep. The normal stuff like doing the last minute load of laundry to the packing of the suitcase, the mad dash to upload past photo files to my web site. I wanted to upload the rollercon photos from the last three years before leaving.

I really should have started this a few nights ago. Today's upload time determined that only the photos from 2008 would be uploaded before I leave (if that).

Added to the list if things to do I also had to pop by the travel center to pick up my plane tickets and hotel voucher for RollerCon and before that had to go to the bank to get rent money and some US dollars. The US dollar is now trading at 98 cents Canadian. That includes the bank fee. Nice.

Everything seemed to time out well and before I knew it I was at union station waiting to board a train for London (London, Ontario). 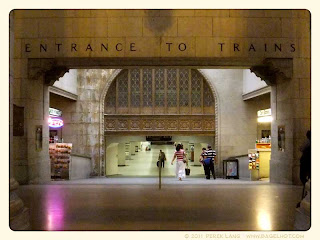 I waited at gate 20 for about 40 minutes before being allowed to board. The heat and stagnant air in the under ground waiting area had me sweating through my t-shirt. It wasn't just me, looking around I saw people using their boarding passes as fans, attempting to blow wind on their perspiration filled faces.

I thought about the combined body odour stink from everyone that would be filling the train cars once we all boarded. If you're reading this blog entry and designing a waiting area for a bunch of people to eventually cram into a smaller space please keep this in mind. Ventilation is key.

It might have been me only smelling me, and I thought I stank (it's like I inherited the mutant power to increase my B.O. levels off the charts), but maybe it wasn't that bad, the woman sitting next to me didn't say anything. Plus her eyes weren't watering. That's a good sign. Yes, I'm comparing my man smell to mustard gas.

In other news, I've noticed on past rides on planes that my GPS doesn't seem to work. I thought it was some kind of shielding based on how the vehicle was made. Being in the train car seemed to have the same effect. It wasn't until we passed Hamilton that the GPS started to find a satellite signal. I'll have to look into this with further experimentation.

London, the destination, was planted in my brain about two weeks ago. The props guy, Robert, on the show I've been working on mentioned a rock concert in London featuring Cheap Trick, Meatloaf and Stone Temple Pilots. There were other bands but the ones that were of interest to me were really Meatloaf and Cheap Trick.

As things worked out at work. My schedule had me not working for the entire week before and after RollerCon. London just seemed to fit into place. 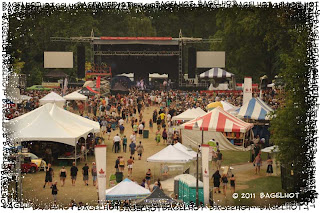 Rock in the Park

Diane was in London. It would be cool to see her again and this time in city six. I met Diane while staying at Tush's place in Montreal, city one. Tush picked her up from the bus station a day before I left Montreal. Since then we've met in different cities. Las Vegas, Toronto, Hamilton, and Kitchener/Waterloo. These didn't all coincide with derby events, FYI we do have lives other than just derby.

Diane met me at the train station, we dropped off my luggage at her place, then got to the park where we caught the tail end of one of the bands. 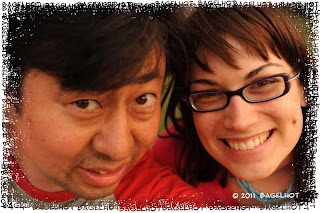 Me and Diane sitting on a large stump waiting for Meatloaf. 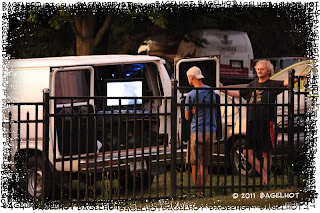 The guy with the Van

It was the end of Cheap Trick's set ("hello there" and "I want you to want me") that we got to listen to. At first from a bridge, then making our way over to the entrance we found a large stump to sit on. This is where we sat while waiting for Meatloaf to go on we heard music pumping out of a guy's van. We figured he was showing his sound system to some passerby. From our vantage point we could also make out that he had a 42 inch TV screen in the back. He saw us listening and asked for us to rate his system. "Did I get a 10?" he asked. Diane gave him a 10 with her hands spread out.

Meatload eventually took the stage, he opened with the song from the Rocky Horror Picture Show (Hot potootie - Bless my soul) then went into some new stuff interspersed with ranting about no one buying his new album. He also told off a guy near the stage (we assume he was near the stage from the audio, we didn't see him) that he should be standing up and not sitting. The argument based on Meatloaf being 63 and standing on stage. I wondered what made Meatloaf so bitter.

We left after the rant and a few of his new (and unknown) songs to meet up with Mirambo at the Nite Owl. A place where I was supposed to buy a grilled cheese sandwich. 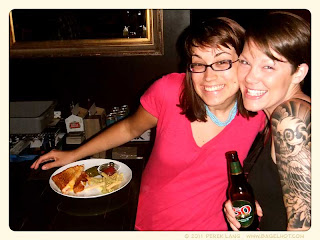 "Grilled cheese sandwich?", you ask? I know right? I had imagined a cheez whiz squirted in between two slices of wonder bread then burnt shut (with a clothes iron) and wouldn't have been surprised if it had a footprint on it. It's hard dehydrated casing could have been flung around and maybe killed someone (from the biker bar next door) before making it's way to the plate. That would add flavour.

To my surprise, my pleasant surprise, my B.S.T. (Bacon, Swiss, tomato) came on some nice bread and was toasted to perfection. On the side there were things that looked like fries but were hollow and crunchy like a shrimp chip. Added to that was a small dish with mayonnaise mixed with maple syrup.

It was quite good. Exceptional even. If Montreal is known for smoked meat and poutine, London is now known for the grilled cheese sandwich. Yes, it was that good. 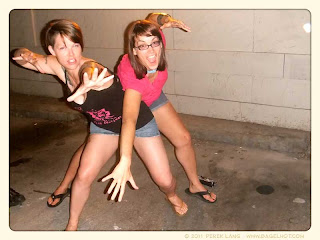 Mirambo and Diane pose in 3D in the VIP room! 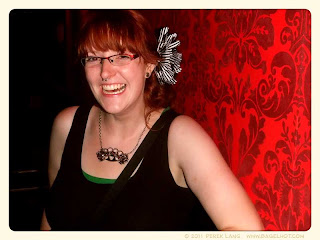 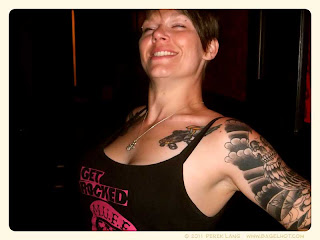 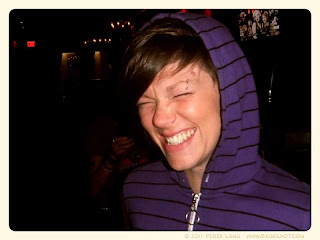 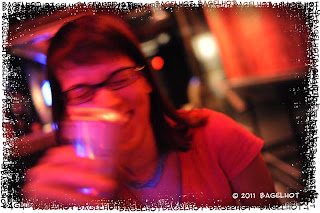 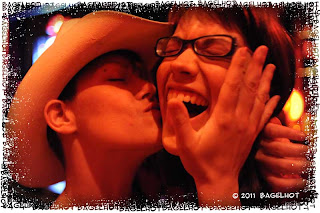