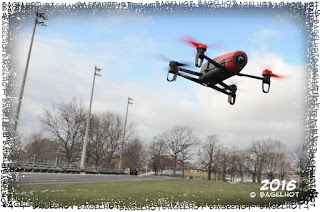 The Bebop Parrot in action

So today I continued this year's tradition of setting tiny goals for myself.  My goal was to go outside and fire up the drone.  Maybe shoot some stuff, maybe not.  The main thing was to get the drone up and running.  It had been almost eight months since using it and I just wanted to see if it still could fly.

The park nearby was all brown and green, there was no snow.  An odd thing for this time of year.  Probably one of the warmest winters I could think of since I've been here (there was that one year I lived in Boston).

I set up and had the drone in the air.  One of the batteries was faulty, I'll have to replace it.  After a few minutes I realized my hands were getting numb.  It was cold.  Despite no snow the temperature was 0°C.  Of course it was.  It had been in the plus temperatures for the last few weeks until today, the day I wanted to fly the drone with no gloves.  Sheesh.

I drone in the end flew and I figured out what things I needed to replace/repair, today's goal accomplished!
Posted by BagelHot at 3:00 PM