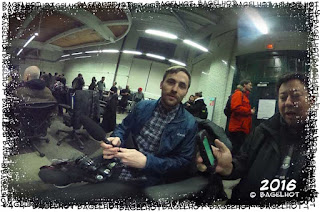 Noel Chaput and I at a Virtual Reality meetup

Today was kind of a write off.  I had woken up at 01:30, stayed awake until just before sunrise to realize it was snowing out, fell asleep and stayed asleep until 15:30.  Half asleep I did laundry and read the book of faces.  Then by the time I had to leave for the grocery store I realized I had to be at a VR meeting at 07:00.

The VR meeting was a bunch of nerds getting together to talk about the latest virtual reality technology to come out of this year's CES show in Las Vegas.  It had been a while since I had been to a tech meeting and I have to say, I fit right in.  Talking to other people about nerdy applications and making the odd computer related joke that everyone around me seemed to get.  Yes, I was in my element.

It also helped that I was carrying around my theta (m-15) 360° camera.  Having gear that people had only really read about made me into a nerdy rock star.  I showed off the device with flair while trying to stay humble.  I was the kid with the cool toy at show and tell.
Posted by BagelHot at 8:00 PM