An impromptu visit to Montreal 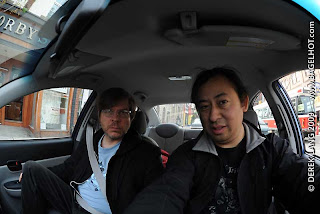 With a few days off of Resident Evil and Darryl needing to get stuff back from Montreal and Lynn wanting to talk about camera stuff, I decide it would be a good time to rent a car and head off to Montreal for a few days. The thought of getting some Montreal bagels made my mouth water. To be honest just the thought of eating smoked meat and poutine from La Belle Province was enough to get me into a car for a 6 hour drive. 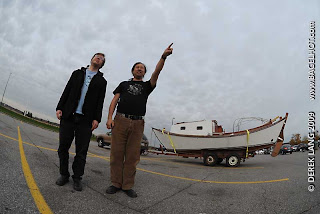 Posing with some boat on a trailer in the background 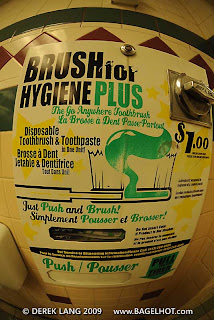 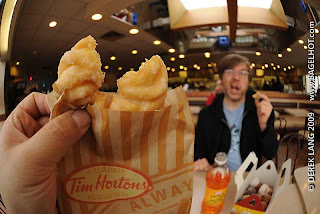 Stopping at the Timmy's. 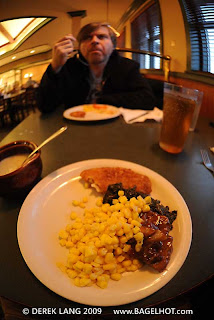 Food at the Flying J

On Darryl's request I drove into the Flying J gas station where we refuelled both us and the car. Part of the decision to stop at the Flying J was the talk of a buffet, an all you can eat buffet. While the gas was a tad cheaper than anywhere else, I was not impressed with the food. Maybe it would have been different had we gotten there during the day when normal folk eat? The food might have been fresher. I don't know. Darryl spoke so highly of this buffet making my food expectations high. In the end the food was mediocre at best. I had corn that looked and tasted like corn that was sitting in butter for hours. It had lost that crispiness to it and had a soggy oily quality instead.

Aside from the sub par food the location of the gas station was great. Before pulling in my vision was starting to blur. It was that sleepy thing I get while driving long distances at night. When the road becomes hypnotic, the eyes start watering, eye lids getting heavy and wanting to close, squinting a lot because the teary eyes are causing everything to blur.

I was thinking I'd nap in the car a bit after eating but the combination of eating, getting something to drink and just sitting at a table, helped a lot. As a just in case measure I purchased three bottles of energy drink. I don't normally drink energy drinks, heck, I don't even drink coffee. The thing that sold me was the slogan "No crash later" and lasts for 5 hours. 5 hours? more than enough time to make it the rest of the way to Montreal. 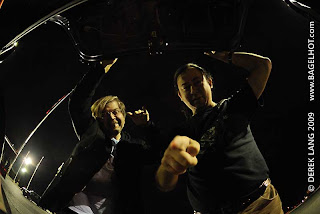 Checking out the trunk. 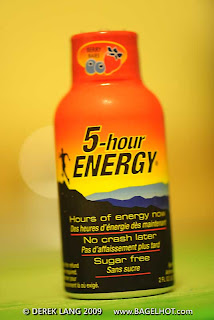 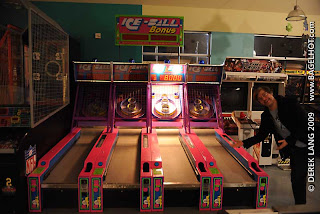 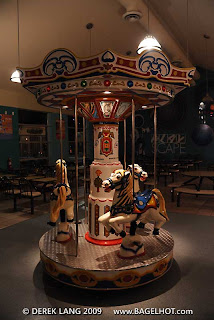 A mini merry go round

As we continued along the highway and eventually the blurry vision started to wash over me. I was getting tired again. It was time to drink some of the energy drink. Initially there was no effect other than it bombarded my taste buds with one of the most horrific synthetic waves of gawd awful I've ever had. I was still tired, my vision blurry. I would have to look for a place to pull over. Then, about a minute later, my eye sight started to clear. More than just clear I had super vision. I could make out each LED in the truck's rear lights. The truck was three car lengths ahead.

The awful tasting bottle of awakener did it's job. I dropped off Darryl at the place where he was going to stay (and where all his stuff was), then drove over to Marc and Tush's place. 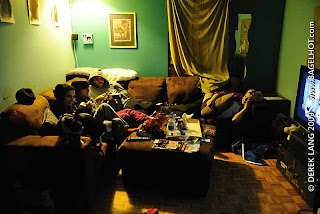 Marc, Lorianne, Cheese and Tush greet me from their couch

The stuff worked too well. I couldn't sleep for the next five hours.
Posted by BagelHot at 10:00 AM