Meanwhile... at the comic book lounge 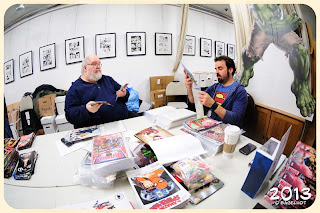 671 Gerrard street east used be known as the Black Cat book store. (79 20.9721 N 43 39.9619 W) it's now a Vietnamese food store I think. The Black Cat bookstore was a second hand bookstore that not only sold books but second hand comics and it was there that I bought some of my first issues of Spider-man, Richie rich, and Batman.

Some of the comics had writing in them (as in some kid drew in them with pen), some of them had sections cut out where there used to be coupons. Overall they were in used and mediocre shape. At the time it didn't matter as long as I could follow the story of Peter Parker, Clark Kent or Bruce Wayne. The owner didn't really sell the comics for a profit and I think I bought some of them for 20 to 25 cents at the time.

When I think about it now that was a pretty good deal as the comics were pretty old even back then as they sported prices of 12¢ or 15¢ on the covers. They may have been from someone's collection. I'm not sure why they were sold so cheaply. Maybe because a new comic was about 25¢ a the time and the owner didn't think he could make money on them. Maybe it was because they were so beat up or maybe he just wanted to get rid of them? I'm not sure which, I'll just remember that I liked the guy and I bought a lot of comics from him.

As I grew older collecting comic books became more of a serious hobby then just casual reading. I started buying comics in "mint" condition (I actually looked for corner damage and page creases before the purchase), sometimes I'd speculate and buy multiples, putting them in plastic bags, supporting them with card board backs, then indexing them and storing them in boxes. It was like I was practicing to making time capsules for a living. It was the kid's version of the stock exchange. What comics would be worth more or less in the future.

I stopped collecting comics around the time The Amazing Spider-man #300 was printed, that was years ago. (I'm writing this post just shortly after #700 was released last December). A comic a month, you can do the math. 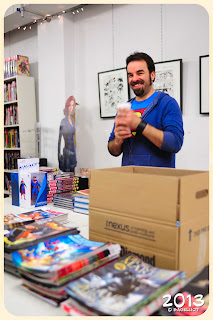 And so now that you know all this it shouldn't be a surprise that me finding a place like the comic book lounge had me a bit enthusiastic. Bold colors and captions with superheroes, comic books reminiscing value, and surrounded by peers of the same caliber. Yes, when I say peers I'm saying comic book nerds. 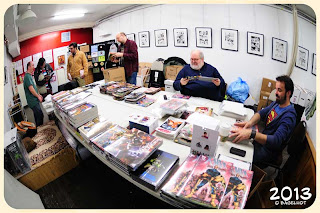 Side note: it has been my observation that comic book nerds have evolved over the years. This could also be due to the people I tend to hang around with so take this information with a grain of salt.

Being a comic book nerd used to be synonymous with being a person that repelled the opposite sex. I'm not talking to the depths of the repelling as if you were into computers, But having both interests would be a double whammy. It's not that people reading comics didn't want to be attractive or have a mate but collecting stuff like comic books or isolating oneself programming put you in a place not accessible to others. You were considered weird.

Over time things of nerddom became recognized as cool. What that meant was the inclusion of the fairer sex. Yes, girls or women, started to accept nerdy things. I think it was around the time of Star Trek the next generation. Society could see women in science roles or as the action role model in space and as a result girls embraced the coolness of science fiction and all the nerdy things that go with it. Nerdy guys now had something in common to talk to these girls about. It wasn't weird anymore. Or if it was weird the people that embraced the weirdness became a larger pool. 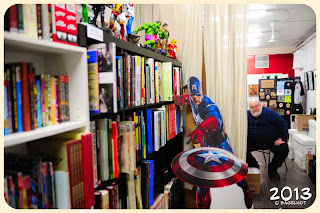 Having said that I would like to point out that there still exists people that are still deemed strange even by today's nerd standards.  There are levels of nerdom and awkwardness that most people are unaware of.  Characters from "The Big Bang Theory"?  Pffft...  watered down versions of the real versions.  I mean come on.  They have clean clothing for one.

The Comicbook lounge is located at 587a College Street on the south side.  Located west of Bathurst and just east of Clinton.  It's on the second floor so look for the sign on the street for the entrance.
Posted by BagelHot at 4:00 PM