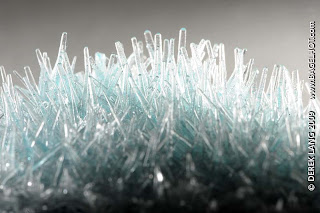 No it's not the Fortress of Solitude, it's a macro photo of the crystals from the grow your own crystals kit. Shot with the 105mm Nikkor lens.

I went back to the old apartment to continue packing stuff (I'm moving apartments). All my camera gear is still there and I while packing up some DVDs I noticed the blue rock with the crystals. See here and here for the previous write ups on this experiment. 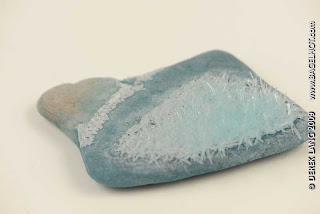 The blue rock with the tiny crystals on it 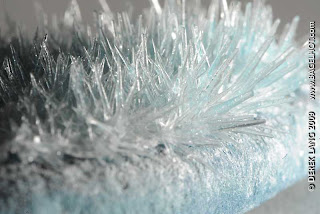 I let the rock sit in the blue solution for about a week. Not that it had to be in there that long but I forgot about it. Eventually taking it out to dry where I forgot about the rock again. Finally, today, while packing found it once more.

A thin layer of dust had collected on it. It had been sitting there on the shelf next to some DVDs for about ten months... ten months?!?!? Gee, yeah, ten months since the last blog.

Using a can of compressed air I made the attempt to blow the majority of the dust off. It seemed to work for the most part. I didn't shoot air at the rock directly as I didn't want to blow off the crystals. How well stuck on the rock is undetermined. It looked pretty fragile. A few quick squirts of air and it seemed dust free. 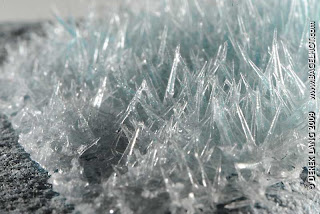 Looking at the photo on the box and then the actual crystals I was a bit disappointed in the actual size. Kind of the same disappointment when you're looking at an ad for a hamburger then seeing the real one after ordering it. Smaller, less filling looking, not as exciting. It was the same with the resulting crystals. The longest crystals in real life being about 1 cm in length while on the box it looks like the size of a steak that you could kill vampires with. 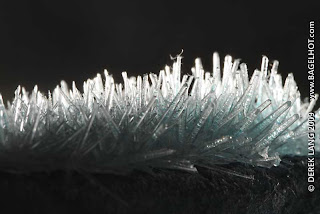 and now with some dramatic lighting

For all the time and effort put into this I would have to say it truly was a lot of work. Mainly finding all the stuff that didn't come in the kit. See previous crystal entry. Then the waiting. Then there's all the potential mess that could have been made with all the blue liquid. In the hands of an adult its one thing but in the hands of a kid? I can see blue stains all over the place.

Maybe that's why there's supposed to be adult supervision. But where's the fun in that (for the kid or the adult)?

Until I find the next funky experiment that looks interesting enough to buy...
Posted by BagelHot at 4:00 PM

kill vampires with a steak?

i'd pay to see that