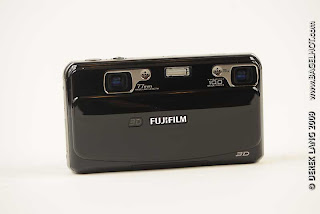 The Fuji W1 with lenses uncovered (the ON mode)

The following is a quick run down of features that I thought were neat as a stereoscopic enthusiast... 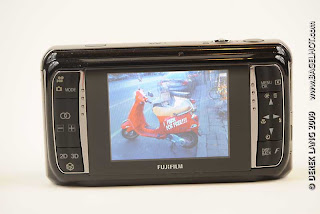 The back monitor is lenticular (3D without needing glasses!)

Overall as a geek toy I'm quite happy with the W1. It has a nice weight to it. As mentioned above the camera can also take photos using a single lens. There are two modes.

This mode is good if say you're on a train and you want to take photos of the mountains you're passing by. Using the standard shooting mode with the two lenses the distance between the two photos isn't enough for you to get really good depth. By placing the camera next to the window hopefully on something sturdy you can program the camera to take two photos X seconds apart.
Duration between photos can be set to one of these settings - minimum, 1.0, 1.5, 2.0, 3.0, 5.0, 10.0 seconds

What if I'm going in the opposite direction or am sitting on the wrong side of the train?
use the TURN feature (this is a poor word choice) to shoot the two photos in opposite order.

This mode is good if you're shooting a still object and it's too small or too large for the standard two lens approach. You first shoot the left image, you then move the camera to shoot the right image. To help you along, the first image that you take is superimposed onto the live feed so you can line up the camera for the second image. 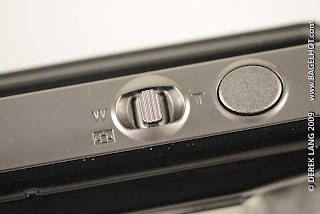 The camera also shoots 2D photos and has a bunch of features like macro mode, face recognition, and being able to shoot in 2D with both lenses at the same time. One might be zoomed in while the other shoots wide. There are other features but being as I bought the camera for 3D won't go into those modes (unless you really want me to - send an email and I'll make add on to this post). 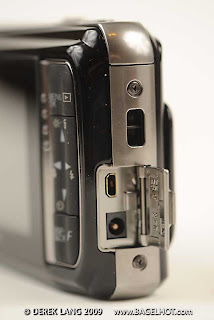 From top to bottom. Place to attach the camera strap, Audio Video out, port for external power. 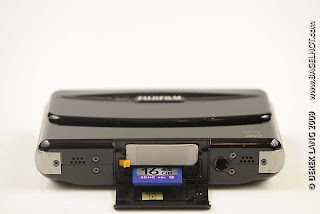 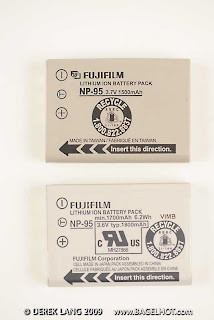 Taiwan battery versus the Japan/China battery 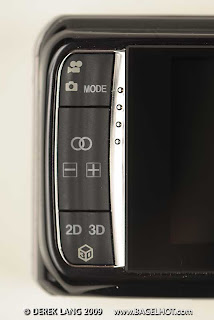 Close up of the back, left side. 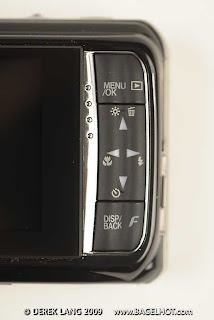 Close up of the back, right side.

The camera goes for about $700.00 CAN. The battery (NP-95) is about $45. I highly recommend looking for the battery that is made in Japan/China. Also, I invested in an external charger so I don't have to use the camera to charge the batteries.

I haven't had a lot of time to play around with this to really figure out the optimum distance for shooting and getting good depth results. My film based Realist gives better results based on my preliminary tests. I'll photograph with the camera under more conditions and do a follow up in a later blog post.

Oh, yeah. There's an "underwater" white balance setting but the camera isn't water proof. I suppose it's good if you're at the zoo looking through that glass wall of a water tank photographing polar bears or fish.
Posted by BagelHot at 3:00 PM

I'm loving my Fuji W1 that Santa brought for my Christmas. I have a slideshow of images (converted to anaglyph) that were taken using the W1 that give a good idea of typical results taken on automatic settings - http://www.youtube.com/watch?v=t8lDixOnIAI

This is amazing. Can we see some video? Do I need red-blue glasses or something else?