I love a parade 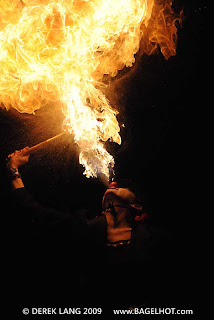 A fire eater starts off the parade

It's the day of the winter solstice and usually there's a themed lantern festival down at Kensington Market. It was one of those days where I actually had to drag myself out of the apartment to go. It was across town. It was cold. I was tired. Waah, waah, waah.

When I arrived in the market I noticed a bunch of people gathering around a ladder in the middle of an intersection. Maybe 50 people or so. Not really that many people. Some of those people had lanterns, some had large mascot type puppets floating above their heads held there with sticks. I watched and waited.

Maybe 15 minutes later I heard someone mentioning something about a parade. It was getting dark. You could see the lantern light better now. I turned around to find myself surrounded by people (see photo below). I was in awe. I was also trapped. 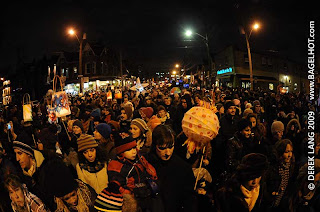 Where did all this people come from?

There was no where to go. Eventually the crowd started to move. That's when I found that I was in the parade, literally. Kids and adults waving their lanterns and me pushed by the flow of traffic right in the middle.

To the tunes of some live brass section we marched past on lookers standing on the side walk. I kind of felt weird holding just a camera. Where was my lantern? I took a few photos as we were walking but it proved to difficult to take photos without a flash. Blurry images and all.

Eventually the parade turned down another street. I used gap as a way out. Then I walked around the block to get in the front of the parade and took some more photos. These turned out a bit better. 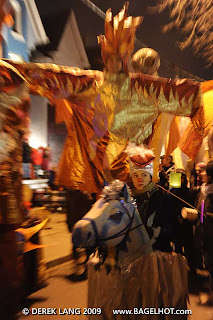 girl on a horse

The parade ended up at a nearby park south of dundas near bathurst. There were fire eaters, jugglers of both the fire and non fire kind, and a bunch of people standing around a baseball diamond with all the lit lanterns.

I didn't stick around much after that. I suppose I was hoping to bump into friends or people I knew. Never turned out that way. Still it was good that I kicked myself into getting outside.
Posted by BagelHot at 7:00 PM