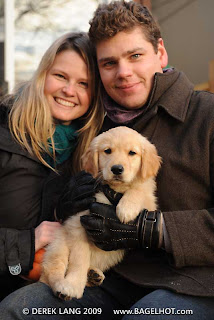 While throwing out some recycling I heard my name being called from over the fence. It was the neighbours (soon to be ex-neighbours) calling my name. They had gotten a puppy (Maybelline). I peeked over to see and had to run in the house to get my camera.

It was around -2. I should have taken the time to get my coat. "What? and miss more puppy cuteness? No time... grab the camera and get back out there." seemed to be the message running through my head. 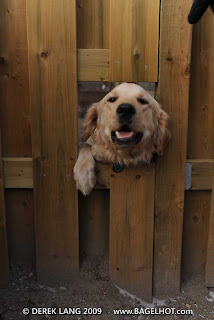 Lucky, the dog next door to the next door neighbours, looks out of his doggie window in the fence.

Taking a few photos of the new family I noticed we had another friend on set. It was Lucky, Theressa's dog from next door. I noticed the doggie head poking out of the doggie window in the fence. It was made specifically for him. How cute is that? 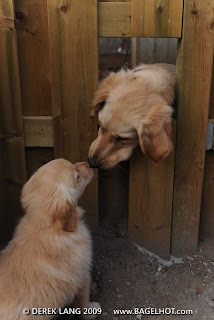 After a bit of photographing and getting cold the cuteness started to wear off. I had to get back inside to finish cleaning and packing.
Posted by BagelHot at 5:59 PM