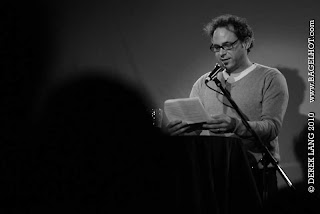 Tonight was the night of the readings. I showed up to hear David Miller, to photograph, and to get out of the house where I was in chicken pot pie mode.

There were three sets. I missed the first part of the first set and missed most of the last speaker's reading. It seemed pretty high brow. Big words that sort of floated over your head if you were in sleep mode. Dry, not very entertaining. I'm sure it was better than I thought. Most of my brain power was going to figuring a way to photograph through the crowd. One of the disadvantages of getting to a venue late.

During the second set, and I had moved to a better location by this point, a reader read her story about sex in an airplane bathroom stall. I was amazed at the amount of detail she wrote regarding the bathroom stall's geography. Pretty accurate, I know this from taking photos in several (that's another story). 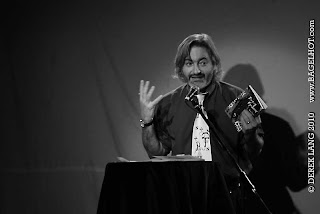 In the third set Dave read an excerpt about a father and son and a web site dedicated to geriatric sex. He was followed by another author (pictured above) that had a bunch of submissions, one on fonts of all things, and another about dinosaur gang bangs. They were funny. It wasn't just the words strung together, it was the actual reading, the presentation. I laughed. The audience laughed. We all applauded at the end. 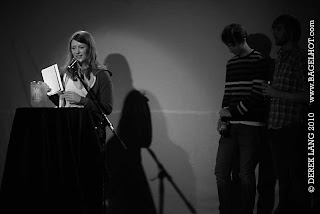 It should be noted that should one be looking for cute brainy girls these reading events is the thing to go to. Just an observation.
Posted by BagelHot at 7:30 PM