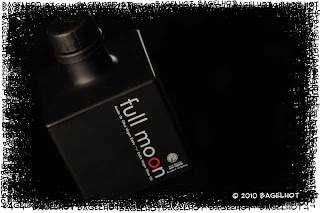 I recorded Dolores giving a speech about olive oil at the Spoke club the other night using my fuji W1. Since then I burnt the video clip to CD and today I finally met up with her to give her the file. As a thank you she gave me a bottle of Full Moon olive oil from Spain. It's ranked some where in the top 13 out of 100 olive oils that were submitted in the Swiss gourmet food show. I say one of the top 13 because Dolores entered a few different olive oils and they all made it within the top 13, So Full Moon could have been 1, it could have been 13, or somewhere in between.

It was quite a nice gift and while I'm thinking about how to use the olive oil properly I thought I'd take photos of the bottle. It's square and cool looking. After all you can't just throw the olive oil into a stir fry or salad that mixes flavours. At least not the first time you try it. You've got to have a dish where you can actually savour the flavour and taste it by itself.

Someone had suggested pouring some of the olive oil on a plate and then tasting in on a nice piece of freshly baked french bread. Yes, that sounds quite yummy.
Posted by BagelHot at 7:00 PM