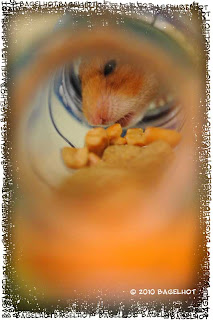 This photo really has nothing to do with this blog entry other than Captain Hill was doing this while I was writing.

It's not that the number six had any significance that created the theme for this blog entry, it's that I actually noticed the anniversary and remembered to blab about it. It would have been more significant if I talked about the fifth year anniversary last year (five seems more significant for some reason to me) but I was busy at the time. Last year I was probably figuring out how to move all my stuff/junk to transfer to my current apartment.

Some things don't change. Year to year, around the month of January I always wonder how I'm going to get by. Something always throws me a curve ball (or fires a bullet) at me and every year I've managed to dodge that bullet and seem to come out for the most part unscathed (also documented, in at least the last five).

This time, this January, a few things are coming into play. While none of them seem that great at this moment, just like in previous years, things will turn out alright. This is what's going through my head right now. It's like thinking about the pain of going to the dentist to get a wisdom tooth out.

The plus side is that I'm not entirely stressed. No acid reflux. Probably because I've been in worse situations or at least similar situations before. I'm not concentrating on going to the dentist and the pain that will occur (although to be fair my dentist is pretty amazing at non pain giving work), I'm concentrating on leaving the dentist's office and being able to eat again and enjoy it. It's falling into an abyss, it's marching towards it with purpose.

Life can be compared to a model walking along a catwalk. There will be a point that the model will fall down. As a model it's easy to do, the floors are generally slippery and the designers make the model wear shoes that don't always fit her feet. This gives to a high probability, if not certainty, the model will fall.

Life is the same way. You will fall down, fail, and even get beaten down to the ground to a point you won't want to get up or not even know how. Everyone fails and there will be times that your best isn't good enough. It's a fact.

It's times like this where I think about my FAB Fashion Editor, Max Macdonald, commenting on the model that just did the banana peel slip, land on her butt, hit her head, wipe out. "It's not how they fall, It's how they recover."

Sure enough the model in question at the time, got up, threw her overly sized shoes to the end of the catwalk, and kept walking toward the camera pit. She was applauded not only by the audience by also by some of the photographers (the ones that were in between taking photos of her). She could have started sobbing or even ran away but no she stood up, with confidence, and did her job. It was definitely something inspiring to see.

To be an optimist, when one really thinks about it, being at a low point not only makes you appreciate the high points, it also shows you the person you really are and maybe more importantly where you can improve yourself.

Of course you may not feel like this is a good thing at the time. Your thought of personal betterment might be overwhelmed by the thought of being stuck in that low, dark, place. Stop thinking of the pain and concentrate more on the leaving of the dentist's office and being able to enjoy that toasted bagel with salmon lox and cream cheese.

Heck, I'm not only going into the abyss but I'm marching right in and marching right out yelling and screaming "Victory!". (insert exclamation of colorful metaphor and fist pump action here for emphasis)
Posted by BagelHot at 4:11 AM