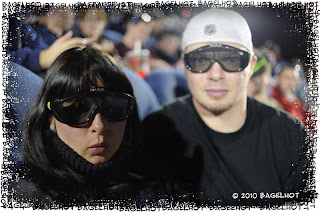 This week has been pretty terrible. No work and the job I had booked Thursday, today, was cancelled at the last minute. On top of that, I had passed up a paying photo gig that fell into my lap after I was booked for today's cancelled gig. I couldn't do both so I had to decline. So a big 'boo' to that.

The highlight today, of this week, was meeting up with some friends from Hamilton to see Tron Legacy. They drove into Toronto (this was good because I had used the last of the change in my change jar to buy the movie ticket).

Without wrecking or giving away anything I have to say that this movie made my week. For about two hours I was reintroduced to a world that had been upgraded, while still reminiscent of the old one introduced to us back in 1982. The Tron of yesteryear had reinforced the computer animation programmer in me (pre Amiga days) and ultimately resulted in getting into visual effects. It was a nice two hour escape. 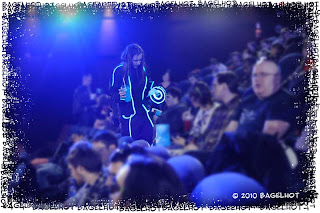 What was really awesome was seeing this fan in a homemade suit (I liked the fact that the slurpee was color coordinated with the lit blue stripes). It's been a while since I've been at a Premiere where someone was dressed up. The last movie was probably the Phantom Menace. After that nothing. Geeks are awesome! Being surrounded by them you could feel the giddiness fill the room when the game warriors showed... I'll stop there.

I would have looked smashing there with my blue DEVO hat on!