...and out with the really old. Boxes and boxes of Laserdiscs.

There are people that say that in order let something new into your life, one has to make room by getting rid of things. Weather it's letting go of something emotionally or getting rid of something physically I suppose this all makes sense. After all, getting a tank of fish is easier after you got rid of the pesky neighbour's cat. You could have both but it might prove problematic in the long run.

As 2010 comes to a close and the time do another apartment move draws near, my motivation for making that move easier has been increasing exponentially as the date approaches. This will be the tenth move since moving out of the parents place, oh, so long ago.

A few months ago (ie. When I moved in to the current apartment) I came to the realization that I had boxes of stuff that I hadn't unpacked from the last move, the move before that, and the move before that move. Some of the boxes were falling apart and I had to move the contents of the crumbly box into a new box. This is when I realized I had a C manual for version 6, 5 and 4 taking up space. If I recycled these books a while ago, along with a whole bunch of other used items, I could have saved space and the energy it took to move them.

The real back breaker as far as moving goes, and I have friends, maybe ex-friends, that will attest to this, is my laserdisc collection. These discs represent all that is unholy when getting friends to help move. It wouldn't be so bad if "we" didn't have to lug all those suckers around. The nearly 800 reflective silver record sized objects takes up about 10 boxes with the average box weighing 65 pounds (approx 30 kilos). It's a frightening thought for anyone about to move.

Moving them along a flat terrain isn't so bad if you don't have to bend down to pick them up or put them down, but I live in a place with stairs. Not just stairs but narrow stairs. Narrow enough that if you're carrying a box, you've got a 75% chance that you'll mash your fingers between carrying the box and into the wall, all while trying to squeeze up to the top hallway. Moving, yeah, hate it.

I told myself that if I had to move out to some other rental place I would unload the boxes of stuff I don't need. Today that's what I've started to do. It's always dangerous opening boxes you haven't looked in for years. There's the risk that you'll start to reminisce or decide you don't want to throw something away.

I started going through the discs to see if there were any real keepers (mistake #1). Mainly stuff that I don't have on DVD or something so rare that it would be worth keeping (along with a player - mistake #2). I have a Japanese disc of the Yamato animated series, It's number 15. I don't have any of the other volumes. There's also the Star Wars Definitive Collection. While it's a bit water damaged, thanks to some jerk I lent it to, it's the three Star Wars movies (the good ones) in CAV format, spanning nine discs, plus a hard cover book. Back in the day I paid $270 for it. $30 off regular price! You can probably get it on eBay now for $30. Ugh! If it wasn't for watching the movies 150 times, I might have been better off investing in 8 track tapes. 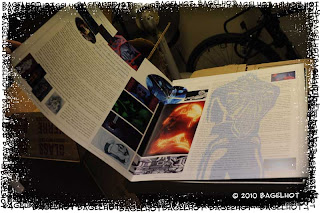 In some ways I feel like one of those record collectors when CDs came out. The large packaging allowed for not only the discs but sometimes books, CDs, and liner notes. The Tron box set (which was around $180.00 at the time) had some liner notes (see above). It was all very nice looking. It also was a movie with directors commentary. This was an awesome feature for movie buffs at the time because VHS and BETA tapes only had one audio track. We take this for granted now on DVDs. 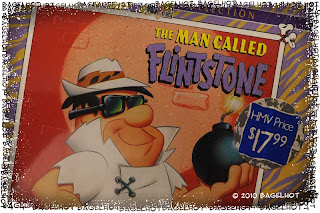 Not all laserdiscs were expensive. As you can see "The Man Called Flintstone" was $17.99. They got cheaper as the DVDs started taking their place on the store shelves. At one point i was buying them from Ken Crane's online store for $3.00 each. Some were good and some were pretty crappy. Cheaper than a rental though.

Of course collecting them for 6 years adds up. Kind of like cigarettes without the smoke. They did keep me entertained all those long sleepless nights doing visual effects work and some were great reference material that I could go over and over again to. That was worth having them right there.