Captain Hill versus the Air Duct 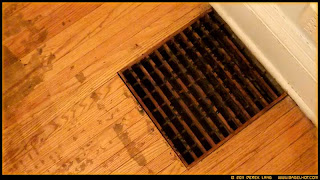 The entrance to the air duct

I woke up this morning to what sounded like a squirrel trapped between the floors trying to eat it's way out. I've seen squirrels outside trying to get in because at one point they had a nest. Being tired I didn't really think much of it. It was 3:30 after all and I had just plopped into bed about three hours earlier after a long day at work.

The scratching kept going. It seemed loud. So not being able to get back to sleep I went up stairs to feed Captain Hill. I had only fed her part of my pork souvlaki on a bun that I grabbed as part of our second meal last night so thought I should feed her some supplementary hamster food (the dry stuff).

When I got upstairs I noticed that she wasn't in the POD. "Uh oh" I checked to see if she escaped the same way as a few weeks ago but the doors were still taped shut. Upon further inspection, I found that one of the tube caps had fallen off. She probably pushed it off and it had landed right into the air duct. Cheryl had moved the POD over the air duct to make room for the new furniture she acquired. The weird timing and coincidence allowed the hamster to most likely fall right into the duct. ugh. 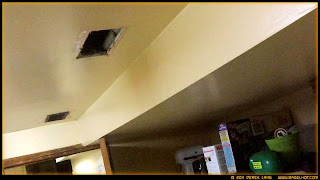 It's now 5:52. I've opened up some of the vents in the basement hoping the hamster will drop in. I've also placed a peanut at the entry to the air duct in the case that she's alive she'll return to the familiar place and eat it if she's hungry. I've also placed a peanut next to the open duct in the basement to hopefully lure her toward the opening. Below I've put a pile of peanuts in a box with a towel as a cushion.

All I can do is wait. That is unless I can find out how to take apart the furnace. This is logically where I think the hamster would be as it's the lowest place to go. I'm not sure if there's a filter that would grab the hamster before going into the body of the furnace. I'll have to wait for Cheryl to wake up and ask her.

"One ping and one ping only."

In the meantime I'm trying to listen for any sounds that might give the position of the hamster away. It's so quiet right now the ticking clock on the wall seems loud. I'm hoping that Captain Hill has found somewhere comfortable and is sleeping right now. It would be around the time she was sleeping.

I thought I heard the air duct upstairs make noise so I went to check and the peanut was gone. After lifting up the grill and looking in (I found a quarter) I didn't see any sign of the hamster. Then off to the edge of my eye I caught movement. Captain Hill not only had the peanut jammed in her face but was looking at me at floor level. How did she get out of the duct? 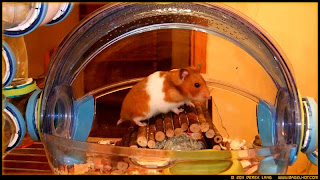 I returned her to the POD with food and fresh water. I taped the cap shut. The Captain ate some, drank a lot, and went to sleep.

That concludes today's air duct adventures.
Posted by BagelHot at 5:44 AM