Leanna and the Tattoo club

01:00 woke up early. That's what I get for sleeping since Wednesday. Yes, my time table of sleep is messed up. Since I couldn't get back to sleep I stayed up for another five hours then went to work.

I got to work an hour early, call time was 08:00. So I spent the hour talking to Paul the hair guy about Still Seas, a movie coming to Toronto and used a bit of time to optimize the computer set up.

Luckily work was pretty simple today. Some inserts were canceled at the last minute and big decisions on wire rearrangement and set set up could be put off until next week. I found out today that my computer work space would be replaced by elevators so I'd have to rewire everything in the next day or so once I got back to work.

by the end of the day 20:45, I was ready to pass out. I was on the subway when I got a call from Leanna. She wanted to go see some band one of her friends was in but didn't want to go alone.

21:55 dropped off computer gear at home.

We ended up at some Tattoo bar. $10 later, inside the dark venue lit mainly by purple and blue lights we saw the band on stage. I took about three photos but only one turned out and not that well I'm afraid.

We talked to some people Leanna knew, went downstairs to hear 80s music (I think it was the Cult) danced a bit, returned to the main floor where more 80s music was playing (Billy Idol "Rebel Yell", Ramones "Blitzkreig Bop"), danced a bit more, then sat down and talked to more people. 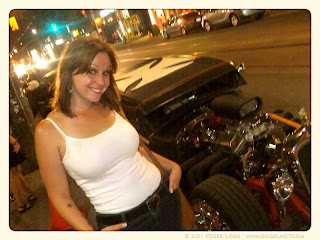 Leanna outside the Tattoo bar in front of a parked Hot Rod.

While all this was going on I had finished a bottle of Smirnoff Ice and while normally I'd probably be okay I think the combination of loud music, lack of sleep, and the booze did me in. I had a buzz the rest of the night. Did I say I hadn't eaten anything since lunch?

I got into a cab with Leanna, got out at Spadina station and took the TTC the rest of the way home. I picked up two filet-o-fish sandwiches from the Dundas West subway station and inhaled them. As soon as I got home I fell into bed and conked out.
Posted by BagelHot at 10:30 PM