Sunday the day of rest 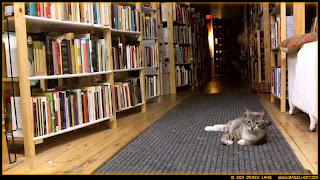 The cat in the bookstore

I woke up today at 15:00 translating to sleeping for about twelve to thirteen hours. With work and going to Hamilton yesterday I suppose my body needed catch up on sleep. I was actually looking forward to waking up late as I didn't have anything scheduled to do.

I was thinking noon or even 13:00 would be good. 15:00 though, it seemed like the whole day had passed me by. Normally I make up for this by just staying up late but Monday I'd have to wake up at 05:30 for work so having a normal span of hours awake wasn't going to happen.

I thought about going to get groceries then realized that I hadn't seen a movie in a while. I ended up going over to the Scotia bank theatre to see Captain America: First Avenger. Yes they've renamed the Paramount theatre to Scotia Bank theatre, after a bank. The film industry really is being taken away by creative types and going to accountants.

After the movie I walked back home. According to Google it was a good 6.9 to 7.4 km walk. I took some photos along the way. For some reason seeing a cat in a book store was interesting enough for me to take the camera out of the camera bag, power it on, and shoot. 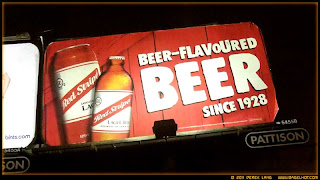 The other thing that seemed interesting to me for some reason was this beer ad. Obvious, to the point, and a good chance it was telling the truth. Kind of like an ad for lawn chairs stating that they don't contain peanuts. In the age of American lawsuits and a sometimes overly sensitive population printing ads like this is a great way to avoid from being sued. 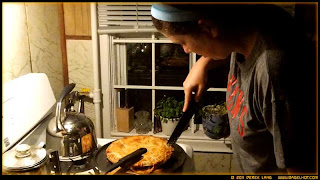 Cheryl with her first home made pie.

I got home around 23:20. Just in time to sample Cheryl's fruit pie. It was her first pie and it was good. (note: the pie shell was premade but the pie overall was still tasty).
Posted by BagelHot at 3:00 PM