This is not a routine, I swear 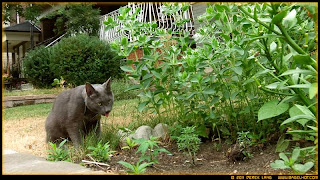 Blue, the grey cat from next door

So I woke up again this morning... late. It was 15:00 and I would have kept on sleeping if Leanna hadn't called me to see what I was up to. Apparently nothing. The Blueberry lemonade vodka didn't have the same effect as the previous night's vodka lemonade. Thank the stars.

Still, I was tired. So tired that I didn't really get up, or my brain didn't kick in until about 16:00. It was around that time I decided to call back people that had been trying to get a hold of me through email (Bless them for not calling me on a weekend early in the morning). 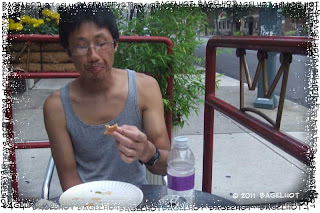 I called my cousin Dave to see how he was doing and as it turned out he was working in the neighbourhood. He had gotten a job working on someone's backyard garden. Since he was in the area and I was hungry I invited him over to go for pizza at the local King Slice on Bloor.

As time crept by I woke myself up. Looked out the front door and stepped out side (still in bare feet). Cheryl was on the porch lounging or resting from a skate with Natalie Hurlin Wall down by the water front. I was immediately head butted by Blue, the grey cat next door.
Posted by BagelHot at 3:00 PM