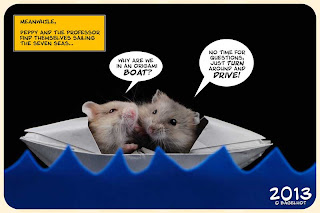 Sunday. I woke up again at 4:30am. Part of it being the fear of a flood occurring after last night's mini flood. Crap came up in the furnace room from the intake drain. It was kind of gross.

Seeing that the hamsters were awake I decided to do get their weight and do a creative.  An odd combination of tasks to be sure.  It was just something I had to do...  right at that moment.

The hamsters despite Peppy looking a bit smaller than the Professor weighed the same amount.  They both came in at 16 grams.  Next up, the photo shoot. 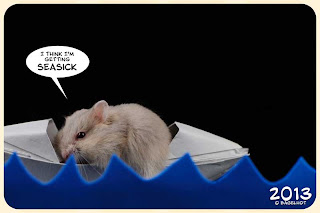 I was trying to think of something to put the hamsters next to or in. There's nothing much around the apartment. I found some foam from a camera project I was working on and I have my large pad of paper that I've been using to scribble code on (yes, in the day and age of electronics I still go to paper for some things).

Armed with some scissors and a few clothes pegs I jury rigged a fake water set. A paper origami boat was made using a sheet from the pad. A plastic tub to hold the boat up so it "floats" on the water. Viola! Hamsters on the sea!
Posted by BagelHot at 4:30 AM