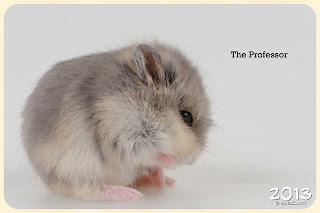 When you lose a pet you realize that it wasn't you training the pet, it was the pet training you. I woke up at 4:30am yesterday and again today. There was no loud thumps from the upstairs neighbour, no outside construction, no alarm clock going off. Groggily I looked up at the hamster cage. I realize now that the hamster had been waking up around this time and it would make a bit of noise moving around. I had been waking up at this nutty hour for the last few weeks because of this and then when realizing it was Captain Hill I would immediately go back to sleep.

This was not the case today. There was no hamster. Only an empty cage with a bowl full of half eaten hamster chow. I had been conditioned to wake up and now that I was awake realized that the hamster cage would have to be cleaned. 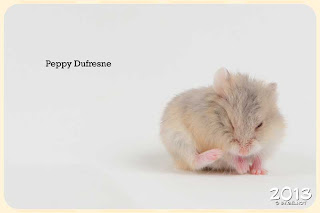 On the way over to William's sushi meet up yesterday I had passed by a pet store. I went in and saw these tiny dwarf hamsters. I suppose that's what planted the seed for what I was about to do today.

I ended up making the trek back to Critters Castle. The terrarium with the hamsters looked like is housed only three hamsters in total.  Upon further inspection the number increased to around 16. A lot of them new born and mostly all the hamsters were buried under the bedding, probably to hide from the light and the noisy slobbery kids pointing at them through the glass.

I had picked two that looked a bit different from one another.  I wanted to be able to tell them apart.  The first one escaped the pet store employee's grasp.  It then zoomed around the aquarium like a cat was chasing it.  It had a lot of pep you might say.  This one then was called Peppy.  The second name came later.  Dufresne, after the character that Tim Robbins plays in The Shawshank Redemption. It seemed fitting to name a hamster who'd escaped after a movie character.  (eg.  The origins of Captain Hill).

The next hamster, was a darker grey.  Capturing this one seemed a lot easier.  Almost as if the hamster wanted to be caught (and maybe leave for a better live).  If a hamster could do that kind of reasoning I figured the Professor was as good a name as any.

Both hamsters are dwarf hamsters and are also known as Roborovski hamsters.  According to some preliminary internet research they are supposed to get along in groups.  The Syrian hamster that Captain Hill was is more of a loner and is territorial, attacking other hamsters if not given enough space.  I thought the hamsters could keep each other company.  I always thought Captain Hill got lonely.

There you have it.  Two hamsters.

The hamster adventure continues...
Posted by BagelHot at 4:30 AM