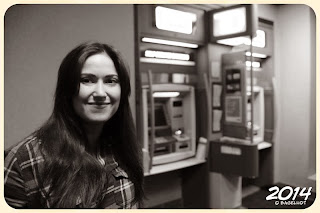 Roadside at the bank

After work I decided to run down to the Lakeview. I suppose partly due to hunger and partly due to just wanting to eat pie (I tend to eat while being depressed, so eating pie is my coping mechanism). Before going to the lakeview I went to the bank next door to withdraw some cash. That's when I was greeted by this girl (see above). She recognized me and I had no clue as to who she was. That's the problem with photographing hundreds of girls in Roller Derby. Unless they ID themselves on a consistent basis you don't remember who they are.

Also it should be noted that skaters tend to look different in real life, off the track. A) they're not wearing skates so they are shorter, B) they usually are not wearing helmets; they might actually have hair or hair in the shape that you weren't expecting.

Putting photos on social sites like facebook adds to this. People can see the photos without ever having to interact with you. They get to know who you are but you don't really get to know who they are or in my case tonight, don't remember what they look like. 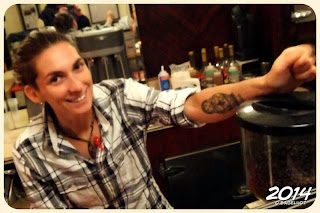 Annie, one of the servers at the Lakeview

I've really been going to the Lakeview on a regular basis since the beginning of May. It that time I've gotten to know some of the people that work there. Not all by name but at least I'll recognize the face. Katrina who made the pies that I was addicted to no longer works at the Lakeview. Then there's the door greeter Caitlin, a server (and skater) named Zamboni, and Annie (see photo). I just found out Annie will be leaving the Lakeview in the next couple of days. This is why I took a photo.