The Hamster is Dead, It's Birthday time dammit! 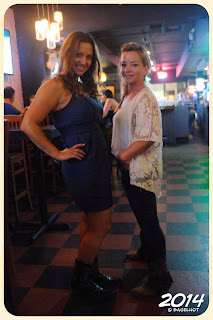 Olie poses with friend at the Boots and Bourbon restaurant.

After wandering around work like someone had just died (oh, that was me, see yesterday's entry) I finally got home and found Fred, my pet hamster, dead.  I wasn't really in shock at this as Fred had been losing weight for the last few weeks due to having diabetes.  What did make me sad, sadder than the sad state I was in already, was that the timing of Fred's passing was kind of crap.  Like kicking someone when they were already down.

I had had it.  How much bad news can someone take in a span of 48 hours?  My friend Olie had invited me to her birthday a few days ago.  I wasn't sure I'd be able to make it as I usually get off work late.  It was 10:00pm when I made up my mind to go.It would be good to see friends outside of the work environment and a drink or two mixed with some merriment might actually cheer me up.

I put the hamster in the pod into a ziplock bag and placed it in the fridge.  It's times like this I'm glad I don't have any roommates.  Can only imagine the reaction of someone opening a fridge and finding a dead hamster next to the coconut water.

By the time I got to the country western bar down on Broadview and Queen most of the birthday party had left.  There were four people left.  One of them just heading for the door.  The other three including Olie were still there listening to a live band play.

At least the birthday girl was there.  I gave her some flowers that I picked up across the street at a variety store.  She didn't want presents but who goes to a party without presents?  Cheap people.  I kind of hate buying presents last minute.  I'm glad the store was open but the flowers were starting to wilt.  Well, it was the flowers or a can of tuna.  Flowers.  Olie seemed to like them.

I ordered a corn dog ($8) that had a very thin crunchy crust.  I'm not sure if I liked it or not. It was nice to see Olie.  She looked really pretty bouncing around to the music.  We didn't stay much longer and we shared a cab back home.  I'm glad I went out.  It was fun.
Posted by BagelHot at 11:00 PM