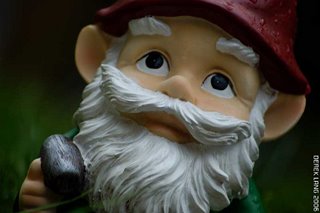 The Gnome - protector of the garden, ruler of the worms, repeller of dogs.

I installed some lemon thyme into the garden today, along with Rosemary, and Italian Oregano. After planting and adding some water I rotated the Gnome to face the plants.

A few days ago while running in the hose to water the grass I noticed my neighbor's dog slowly advancing on the gnome. It went to sniff it, then abruptly jumped back (almost like it got an electric zap - it was odd). The dog then started barking at the gnome. Terry, my neighbor, had to lift the dog up under his arm to bring it back into the house where it continued to bark for a few more minutes.

It's too bad the gnome doesn't have that affect on whatever is eating my mint. I'll have to see if there's any damage done tomorrow on the newer plant specimens. Which brings me to...

This afternoon I was uptown looking at a spy shop. They have a small camera (about the width of a quarter) that runs off a 9 volt battery and transmits to a receiver. Yes! It's wireless and only $200 (that includes the receiver). I was thinking I could attach a solar panel to the battery attached to the camera then place the camera in the eye of the gnome and "see" what was going on in the garden... or better yet have the video sent to the computer so if the image changes/detects motion it would use another transmitter device to squirt water from the gnome to the unsuspecting target. hee hee hee.

Okay it'll cost a bit of money to get that contraption made. There's always Terry's advice to buy some chicken wire to fence off the plants from the outside creatures. It would probably be under $20.00.

Yeah... I like the Gnome with the camera and the squirt gun idea.
Posted by BagelHot at 1:00 PM

Your neighbours dog is a freak.