Day as a Photo Slave 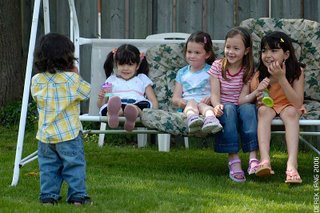 In a world of cooties, Maddox still interacts with "the girls".

Today I went up to Milton to shoot a birthday party for the winner of the photo slave raffle/auction. The photographic subject was Maddox, the son of the winner, who was celebrating his second birthday.

Despite the looming clouds and the rain warning the day went rather well. The sun stayed out and the rain was kept at bay until the party was over. It was perfect timing on the weather's part. It would have been disastrous as the event was outside in the grandparents backyard.

Cindy, the proud mother and winner of the photoslave had really put a lot of work into organizing this party for her kids, family and friends. A cowboy with a horse for the kids, a clown that performed magic and made balloon animals, a cotton candy machine, along with food and all the organization that goes along with an event of this magnitude.

The kids overall were pretty happy. The clouds blocked direct sunlight from hitting anyone most of the time producing diffuse lighting (no harsh shadows or squinty eyes). There was always something interesting to shoot. I spent just under five hours shooting from the time I was picked up to the time the party was over. My photo tally came to 1134 pictures after getting rid of the images that didn't turn out.

As an aside, shooting kids interacting with one another was hilarious. You've got everything. Drama - girl crying from not being able to get enough candy off the ground from the smashed pinata. Comedy - "Take that" as one kid stabs the other with a balloon sword. Action - the kids running after Easton, the boxer (dog).

The best part is that I helped generate money for Jay's two kids. Doing what you love and helping people at the same time, what could be better?
Posted by BagelHot at 11:30 PM

Bagelhot, you are a good, kind, generous person. I am especially proud today to count you amongst my friends...we can all learn from you.