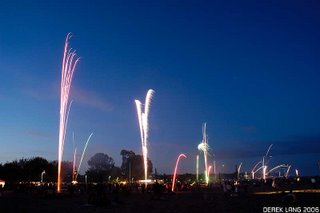 Today being Queen Victoria day here in Canada I took some time off work to go down to the beach and see the annual fire works. The beach was packed. Unfortunately they were a lot of people that didn't know how to use fireworks. One guy decided he wanted to hold the fire work in his hand to watch it go off. Lucky for him one of his friends called him an idiot as he was holding it facing himself. He let go just in time to see the firework go off just missing him.

I'm surprised they don't have classes for these things. Another guy was trying to light the rocket by covering it with his body trying to block the wind. Accidents waiting to happen. It brings me back to the model rocketry days. 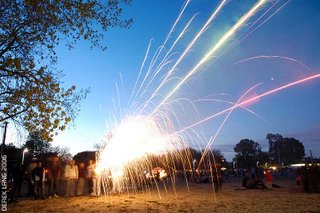 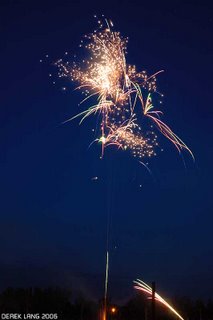 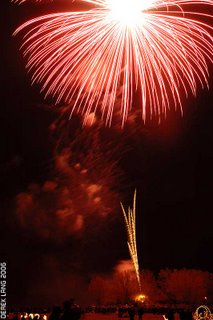 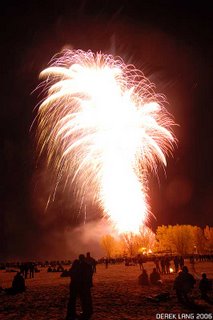 Shooting fireworks is a tricky thing as you never know where the actual exposion will occur or for that matter how many will go off. A good example of under estimation is the giant pineapple-like image I shot of multiple fireworks going off at once. It became a big white shape in the sky.
Posted by BagelHot at 9:30 PM

I remember when I was a kid, the rules seemed to be stricter regarding who could handle and buy fireworks. My Dad was one of the local community fireworks volunteers, and did have to take a short course with the fire department. Since he had taken the course and volunteered each year on Victoria Day, he was allowed to buy fireworks and have them in our own backyard for my brothers birthdays, which is May 31. He was very respectful of the fireworks, but perhaps in part because my Mom was always scared that he was going to blow himself up...

More recently, I worked on Spadina for a wholesaler of junk, who sold fireworks at Victoria Day. Just before the weekend, we would get a massive shipment of every kind of firework imaginable, and also a little packet of "no smoking" signs (which now are posted on the doors of my apt.) There is a permit that one is (or was, back then) required to have to buy the fireworks, but I'm sure the bosses never checked. One of my most interesting memories of that job was watching one of my bosses standing in the middle of his shop, looking important, as he always did, surrounded by several thousand fireworks, and smoking a cigarette, as he always did.