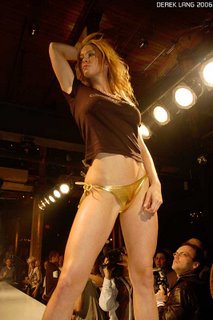 Another Playboy Fashion was held in Toronto. This time at "This is London" a local night club downtown (Richmond, east of Spadina). For bloggers that have been keeping up to date the last playboy fashion show held back in November was terrible. In comparison this show was much better organized.

There were two runway showings. One for the media, and one for everyone else. They had bouncer types making sure that if a person did not have a camera they had to be standing about a meter away from the stage. This allowed us to shoot the models without having to worry about some person holding a cell phone up the models skirt trying to take a picture. Classy.

The runway was lit with a bunch of lights compared to the last show that was maybe lit with two or three floods. It made it easier to shoot the models without having to rely on slow shutter speeds in order to get the exposure right. 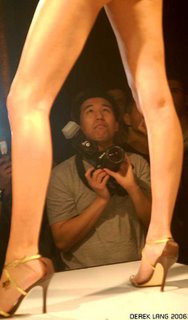 Simon Mah - "photographer to the stars"

The only complaint I had was that there was a video guy wearing a large cowboy hat. Hello? They should teach photographer etiquette in schools. Do not wear hats to photo events. When looking at the videocam's monitor I noticed that the camera wasn't even shooting the model. I think the camera guy was too busy ogling the model and not paying attention to looking through the actual viewfinder.

As I sympathize with the videographer I was still annoyed that he was blocking us photographers in the back and not getting any good shots himself. I wondered if he indeed was media. As a photographer shooting an event you must detach yourself from the subject no matter how good looking they are. Nikon's VR or Canon's IS are good lens features for dealing with shaky hands due to nervousness but even the best technology isn't worth the money if you don't look through the lens.

I bumped into Simon Mah, photographer for the former www.pinuppotentials.com site and Amy Grover a model I didn't recognize at first. She recognized me.

As it turns out I shot pictures of her at the Aries party. It may have been that she was wearing a small gold bikini... "Sorry I didn't recognize you without your clothes." How many times do you get to use a line like that?

Not often enough apparently.
Posted by BagelHot at 9:00 PM