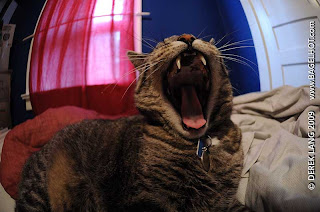 I spent most of today packing and getting gear ready for the trip to vegas. Still exhausted from yesterday's trip from Pittsburgh to Hamilton and Hamilton to Toronto I was moving a bit slow. Woke up at 10am and proceeded to go through the trip check list stored in my brain.

Socks, clean underwear, batteries, camera gear, battery chargers, compass, shoes... Hmmm.... Shoes? Since there's a weight limit to the luggage one can bring on the plane I was torn between dress shoes and more camera gear. what to do, what to do? I thought I'd leave the stereo camera gear at home and bring the extra pair of shoes for the formal event of Tush's wedding. Later I changed my mind and left the tripod taking the 3D gear. I hope that was a good call but we'll see.

While taking out the recycling (there's still a strike in Toronto for garbage pick up) the cat, Pumpkin, made his way up into my apartment and beelined for my pillow. What's up with that? I let him sleep there while I was in the other room getting my stuff together. He'd be locked out for the next week or so.

The trip to the airport via TTC took just under 2 hours. The line through customs took an hour and a half. Ugh... so slow. There was a highlight to all this though. At one point a guy started mumbling something at the end of the line. I couldn't hear him but he was making his way from the back of the line toward me.

I thought he was asking for change. Turns out he was asking each person for permission to cut in front of them because his plane was leaving at 7pm (in half an hour). When we heard his plight not only did we, as a line, let him through, we all started to chat "Go go go! Catch your plane!! Go Go GO!!". It was amazing! Unfortunately our over zealousness was cut short by the customs officer telling him, in a unemotional voice, to stop and stand behind the red line.

The customs officer that interviewed me was pretty quick. "How long are you going to be in Vegas?" was the only question I got. Wow, that seemed fast. He marked my card and motioned for me to leave giving the declaration card to the next officer. The idea of speeding through customs was short lived when the second officer told me to go into the little room to the side.

Inside the room a third officer grunted at me and pointed to a forth officer. I wasn't sure if I was supposed to head toward her or if there was a line of some kind. There were a few people lingering around. I was eventually told by the forth officer to sit and wait to be processed.

After about 10 minutes looking at the ceiling I was then instructed to open all my bags on a counter. While going through the gear and clothing the customs person asked the same questions, where was I going, how long, why all the camera gear. I told her I was going to photograph a wedding and a roller derby convention.

Her eyes lit up at the sound of roller derby. It was an invite to fill in more details. How long the convention was, how many people were showing up, is the game rigged (like wrestling), are the girls really as tough as they seem to be, where is it played. I probably spent another 10 minutes talking about the game, why I shoot it, and how I got into it. A small summary of my life in derby I suppose. Satisfied with my answers and maybe because I wasn't carrying a bomb I was allowed to leave. 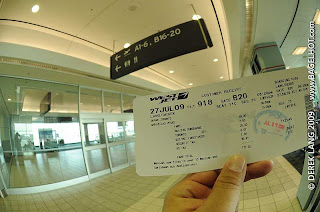 "Those doors are locked"

I had arrived at the airport 3 hours early. Customs had eaten up half that time, with the other hour and a half I figured I could get a Tim Hortons donut and an ice cap and sit in front of the plane waiting for it to be boarded and finally tgake off.

That didn't happen. As I approached the gate B20, I realized that I was cut off by a closed door. It forced me to wait in a section of the airport with really crappy over priced food. Iced Tea and M&Ms totalled $7.09. Rip off. But I was hungry. I could see the Timmy's out on the other side of the glass. A security guard told me the doors wouldn't open for another 40 minutes. 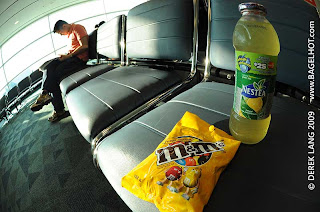 I sat there eating for a few minutes listening to my new music device and then eventually started talking to someone else who had been locked out from the flight. She was going to Vegas for a dental convention and like the customs officer also seemed interested in the derby convention once I started to talk about it. That's when the girls from Montreal showed up. 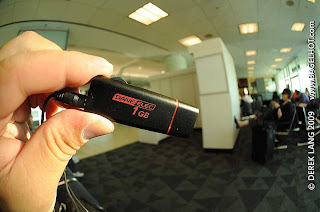 My $10 MP3 player from Pittsburgh 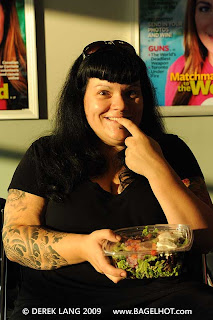 "Do I have salad in my teeth?"

Trash and Bandit kind of popped out of nowhere. It was a nice surprise. Bandit relayed a story of having to call a taxi for Miss Carriage in Montreal due to her unsoberness and yelling at a mail box that was making her angry. M.C. doesn't get drunk much but when she does she gets all slurry and does some funny ass stuff.

The doors opened to the flight corridor. We went in and a few minutes later I decided that it would be a good time to get that donut. D'oh! Now another door was closed and the Timmy's was still not accessible. In it's place... another over priced food station. I picked up a banana and a apple juice. $5 something. Then just as I sat down, they announced the plane was boarding. 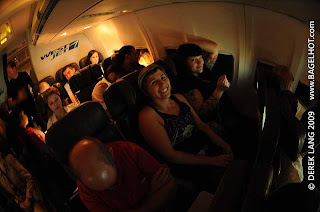 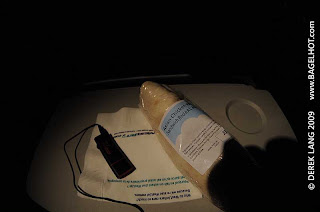 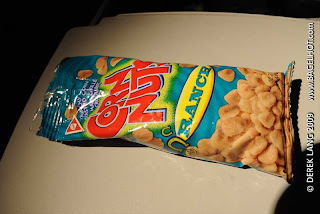 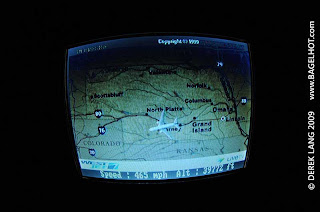 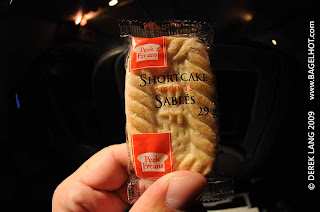 Once in vegas we got our luggage and headed for a van. $6.50 for a one way pass to the strip. We bought the tickets off a surly woman who I think we pissed off by ordering all three tickets individually. Sheesh. Didn't get out on the right side of the bed I suppose.

Waiting for the van to show up and load allowed us to appreciate the warm weather. Agh. Hot and humid more like it. I thought the desert was supposed to be dry. The humidity might have been from being so close to the air conditioning. It still felt like you were standing in an oven.

We got out of the van at the Imperial Palace. Once we were given the luggage we started walking away when the driver said "Did I do something wrong?". No. But we did. He was sticking out his hand for a tip. Whoops. I gave him $5. Jess was digging for change when the driver said the fiver would cover it. Well, that was a bit embarrassing. 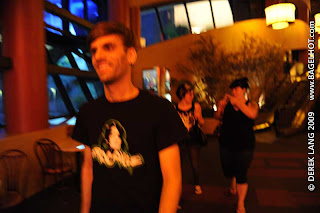 We checked into our rooms (Trash and Bandit room 17148, me room 17145) then met up with J.P and Raph. Our group made it's way down the strip to the nearby 99 cent Margarita bar. It's about two hotels away. It was there that we joined Georgia W. Tush and friends... and Mark, the groom. They were in the middle of participating in karaoke. Tommy Toxic just jumped up onto the stage and started singing... 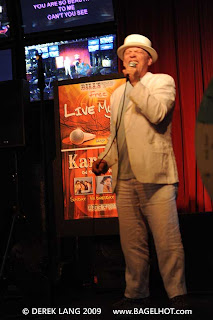 Tommy Toxic sings "You are so Beautiful" to Tush 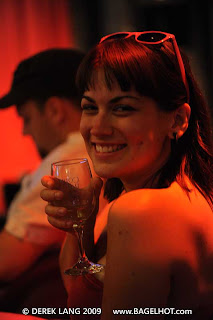 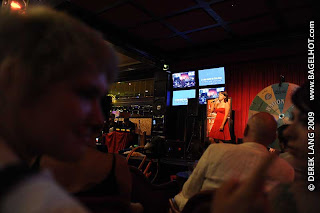 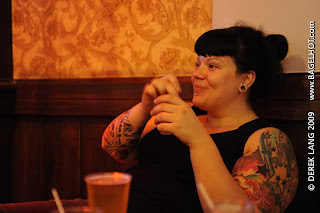 Trash takes in the atmosphere 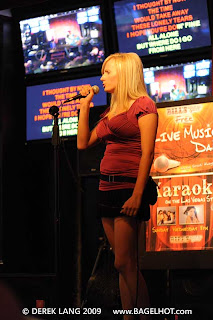 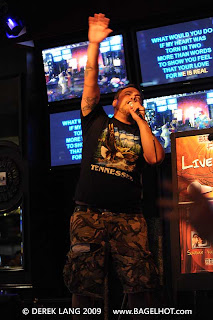 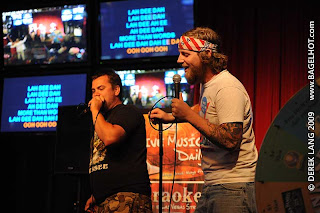 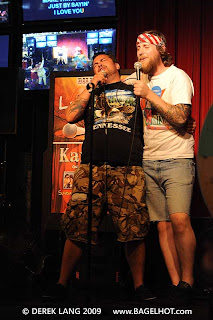 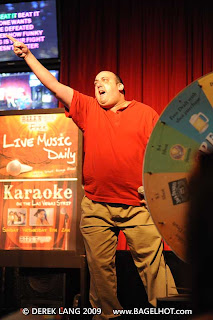 I'm not sure if Egor was put on stage when no one else wanted to sing. He wasn't that great of a singer but he had moves that made us laugh. He would also play back up air guitar for other people singing. 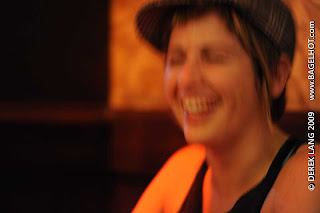 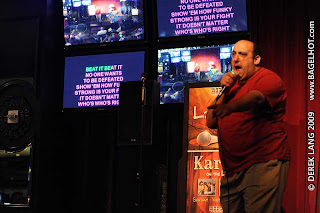 Egor continues to destroy "Beat it". 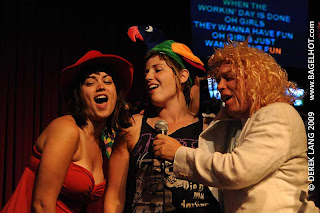 Diane, Jess, Tommy and some other girls sing "Girls just want to have fun" 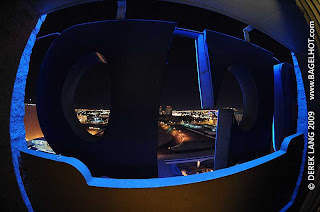 My window is right where the Imperial Palace E and R are
Posted by BagelHot at 10:00 AM