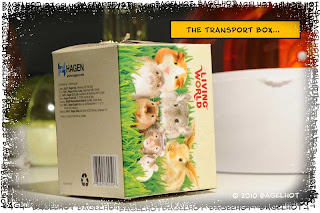 It wasn't hard to come up with a name for the hamster. On the way home the hamster started eating out of the transport box they give you from the pet store. Being that it was only cardboard once the hamster saw light coming through a crack it just started chewing away. The crack got bigger becoming a hole. It got to a point where I thought about going to the corner Starbucks to get a grande cup and lid as temporary storage. 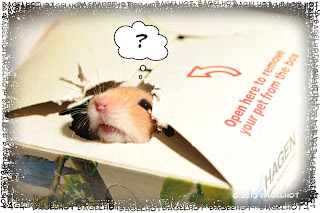 By this point the apartment was only a block away, I walked the rest of the way to the house pushing the hamster's head in (gently) with the free finger I had. Roger was home and showed up at the door just in time. The hamster had almost escaped while I was fiddling with the keys opening the front door. Roger grabbed the bags with the habitrail, food, and wood chips. I had both hands busy trying not to drop the transport box, having it unfold, and keeping the hamster in. We made it to the kitchen where I put the hamster temporarily into a pot while I built the space station of a hamster cage. I'm not kidding it's pretty futuristic looking. 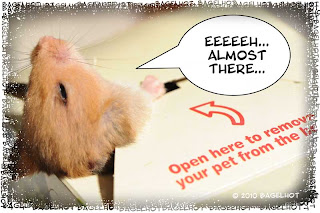 Fluffball, Vader, James Blinn (the second1), fatso (perhaps a bit demeaning), the Hamstertm (like hipster but a "ham", for "one that likes the spotlight"), Ham Able Lecter, Nugget (short for Hamster nugget), Nick (Nick's your buddy/pal2). These were all names that went through my head on the way home. It wasn't until I noticed that the hamster almost escaped out of the box and almost got squished in the bag that a name from the Great Escape was going to be used. If the hamster had a hamster sized baseball I could see it bouncing the ball off the wall in the box (had the ball not eaten it first). Captain Hilts "The cooler king". Yeah.

It wasn't until later that I found out the the hamster was a she. On top of that Captain Hilts is probably trademarked or something being that it's from a movie. So instead I changed the name to Captain Hill. Partially named after Hilary who is one of my more adventurous friends and who would escape out of a box had you put her in one. She might not eat her way out... then again who knows? 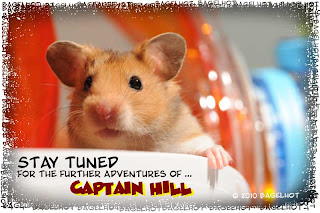 1James Blinn is a computer graphics guy who used to write a column in the IEEE computer graphics and applications magazine I used to read in high school (if I could get my hands on them). I named my first hamster James Blinn after this guy (yes, geeky I know) hence today's hamster would have to be named James Blinn the second.
2 See the movie "The Sure Thing"
Posted by BagelHot at 7:00 PM

Dude! You got a hamster?! What brought that on?!

Damn, I'm jealous. I had four (one after the other) when I was young, and they are ridiculously cute. I would get another one right now in a second, but they don't live long at all, and it's heartbreaking for me to see an animal suffer/die.

Still, they are fun little bastards... not terribly affectionate (...well, not at all, actually), but... cute!

I considered getting one of those... then I considered a rabbit, chinchilla, and a bunch of other things before finally deciding on Maya, my cockatiel (since they are affectionate and bond with you).

BTW, those guys can squish flat and go under a door. You'd be surprised how flat they can go. They are also pretty fond of ripping up carpet (usually in front of a door), so watch out for that. They'll also tend to collect lots of food (stuffing it in their cheeks to the point where they would make Dizzy Gillespie do a double take), and then unload it in some corner (like a little food cache)... so don't be surprised if you find that.

They love running wheels, too.

I've had a few hamsters years ago. I've been toying with getting another pet for a while. I'm allergic to cats, my apartment is too small for a dog. Personally I would get a cat if not for my mad allergies to them.

The whole habitrail thing is neato. Although if you rearrange the cage too much it probably messes with the hamster's head.

There's not much of a brain in a hamster to mess up, so go nuts with the Habitrail re-arranging thing! She'll cope, trust me...