The weather started getting rough, the tiny ship was lost... well the weather did get rough in the sense the temperature dropped from the 40s (C) to the teens in just a few days. That combined with a lowered immune system from being around smoke, animals, and maybe a bit too much derby girl excitement over the weekend (is there such a thing?, by the time Sunday morning rolled around I was feeling quite drained. I woke up exhausted and craving more sleep.

I slept on the GO bus back to Toronto, backed out of a dinner with Rebecca, and went home to get more sleep. It took the form of a nap. I woke up a few hours later with that scratchy feeling you get in your throat when you know you're about to be sick... real sick. It was pretty much down hill from there.

Monday rolled around and Kablam, a full on cold thingy. There was a chance I'd get work on Tuesday doing a TV playback gig so I slept through Monday all day in the hopes the cold would just run it's course and get the heck out of my body.

8pm Monday; I got the call, it was official. Work to be started at 9am the next day. I went back to bed and slept for two more hours before I realized I couldn't sleep any more (I suppose sleeping through the whole day would do that to you). So I stayed up; got about 30 minutes of sleep and at around 6:30am got up and went to work.

Fever, sweats, coughing, runny nose, wheezing and to top it off I was tired. Yes, even after sleeping all day the day before. ugh. I managed to make it through the 12 hour work day. It was gruelling but it would be good to get a cheque in the end.

As it turns out my work luck wouldn't stop on just the Tuesday. I had been called to work the Wednesday and the Thursday as well. Knowing this I bought a bottle of cold F/X and started my dosage (6 the first day, 4 the second day and 2 the third day).

I started feeling better by the third day. Still tired though. I had worked until 1:30am Wednesday night wrapping out the gear. Thursday I had a four hour pre-call that got me into the studio at 8am. While I only worked about 10 hours on the Thursday the lack of sleep has accumulated to the point I fell asleep on the bus going home, managing to wake up at the stop at the subway station.

I can't remember who but some one asked why you never see baby pigeons running around the street. I thought about that for a short moment and couldn't recall seeing any on the street or at all for that matter. The building that I was working in, the building that was used as a location that we were making a TV pilot in, had an exit to a back alley. The alley was like any other alley I suppose. Hardly any traffic and air conditioning units half stuck out of various windows.

It was on one of these air conditioning units that a bird's nest was built and two storeys below a line of shrubs that housed a small baby pigeon. The locations person and I came to the conclusion that it fell out of the nest and couldn't fly back up. It was trapped at the bush level. Lucky there were no cats around.

When no one was looking the mother bird would swoop down with food and feed the little bird. The little bird would flap it's wings and chirp. It was during this time (while I was on lunch) that I crept in with my camera to get a photo. I had a 28-70mm, so getting in close was actually pretty difficult. It took a few tries before getting the photos below. 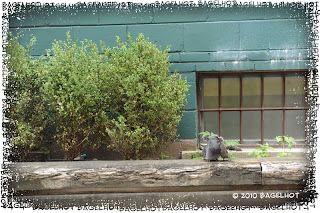 Mom and the grounded baby pigeon. 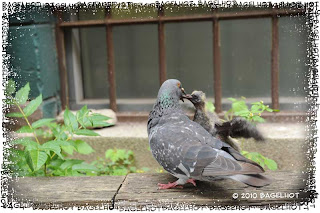 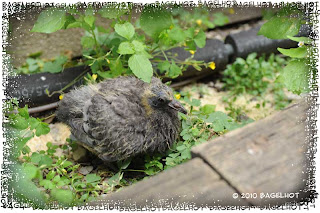 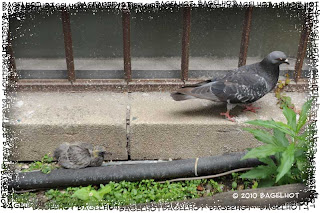 Mom walks away as I approach. 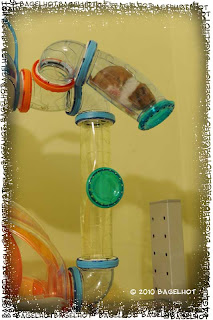 The pod that was housing Captain Hill was getting kind of poop filled. I decided to empty the pod and refill it with new bedding and food. As it turns out the Hamster book I bought says that you should let the hamster get used to it's environment without moving or cleaning things. Just replenish the food and water. Otherwise the cleaning may result in an irritable hamster. Whoops.
Posted by BagelHot at 1:28 AM