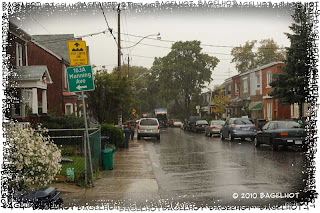 I slept in today waking up around 10:50am. It was raining. Not just that small amount of rain that you can wander through without really getting wet, I'm talking about crazy buckets of rain. The kind that will soak you to the bone by the time you walk down the block.

For the last few weeks I'd been getting up around the same time and trying to make it to the local croissant place in order to get a chocolate croissant but by the time I got there the chocolaty baked goodness was sold out. Augh!! 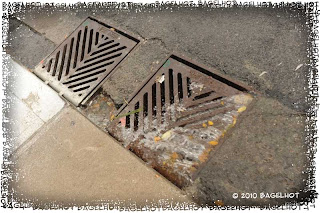 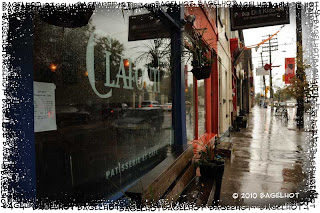 Today was the perfect weather scenario. Who would be crazy enough to venture out into the torrential downpour for a croissant; aside from me that is? Maybe in BC or London, England where it rains more out of the year than not; but in Toronto? Let's face it the majority of Toronto people are wimps when it comes to rain.

I was soaked halfway down the block. The cafe is about a 20 minute walk from my house which translated to a whole lot of more blocks. I could feel the wetness breaching through my jacket. I should have just wore a wind breaker. It would have had the same effect as my heavier jacket of not really stopping the rain but wouldn't retain all the water which was weighing me down quite a bit.

I could feel the water seep through the sleeves whenever I bent my elbows. The rain falling on my camera bag was being repelled off the rain resistant outer layer and being soaked up by my pants. My feet were wet. I should have worn sandals. My socks had absorbed so much water it felt like walking on wet sponges.

I walked into Clafouti followed by a trail of water. Water was still pouring off me as I reached for the tongs to grab four of the six croissants left. I placed them into a semi-soggy paper bag and asked if I could get an additional plastic bag as I didn't think the paper bag would hold up against the outside environment. 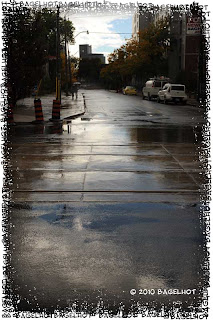 About two blocks into the walk back the rain stopped, the sun came out, and I became really hot. I started to sweat in the already soaked jacket and had to unzip the thing to cool off. 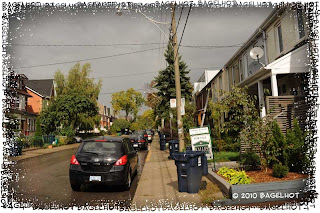 Sun starts to come out. Me with the bag of croissants. 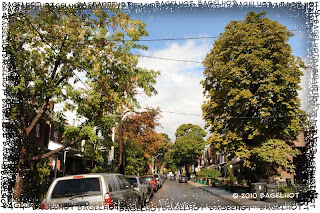 Eventually I got home, put the soaked clothing in the washing machine and got into dry clothing. The croissants were heated up in the oven to make them crispy again. Today would be a good birthday. 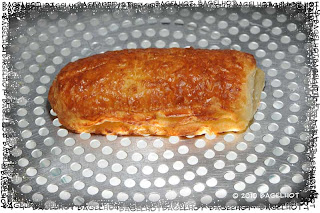 Toasting the sogginess out of the croissant.
Posted by BagelHot at 11:30 AM