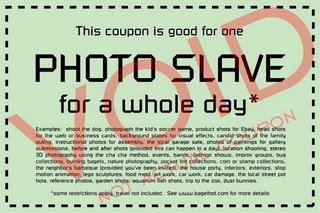 The "photo slave" - Crazy or Genius?

A few days ago I heard about two kids being orphaned and my friend, Brook, was trying to raise money for them. As money hasn't been very abundant in this blogger's wallet over the last few months the idea of giving money in any amount didn't sound too realistic. "There's how many days till rent's due?", as I look over into my change jar filled mostly with copper colored coins. Oh yeah... There's nothing like living on the edge of the abyss.

Someone once said that giving money is easy, giving one's time is more difficult. And so, like a lemming heading over the cliff, I decided to pick the difficult path and try to help out by donating my time. Initially, there was the idea of donating some of my junk to the raffle but somehow that seemed wrong.

Using the raffle as my personal garbage truck? The selfish part of me didn't really want to part with any of my laserdiscs anyhow. Who would even enter a raffle that had the prize being a pile of laserdiscs anyway? The point of the raffle is to make money not unload stuff.

Although there are certain names that pop up, that would take advantage of a situation such as this, I decided I didn't want to be grouped along with them. It makes me angry just thinking about people like that. There needed to be another solution. After a few days of mulling over things, how to earn money faster, how to win the lottery, how I could go about "fixing" things, I bumped into a girl that said "If only I could afford a photogrpaher." She thought my prices were way too high just from looking at some of my photos. I suppose my photowork just oozes "expensive". Won't argue with that... and hence the "Photo Slave" idea was born.

For more current information about the raffle (raffle news is still pouring in) and what the "Photo Slave" thing is all about go check out my site at www.bagelhot.com. I will update the site as I find things out.
Posted by BagelHot at 11:30 PM