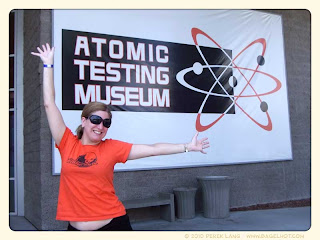 Supersonik! in front of the Atomic testing museum.

Marcus (T. Carcass), Kim (Supersonik!) and I spent our last few hours in Vegas at the Atomic Testing museum. It's in a building pretty close to our hotel. I walked by the building last year on my way to Best Buy. Wanted to visit but didn't have the time to fit it in. When Kim suggested to go (and she had coupons!) I was blown away. (blown away? atomic testing? Unless you're helping pay for this blog I can make as many crappy puns as I want - ha)

The first room we entered was dedicated to photography and the bomb. I found this quite interesting being a photographer and all. While I loved the photos of the photographers standing in front of the exploding dust clouds I don't think I'd want to do it myself. I'll just stick to your standard conventional ways of blowing things up and avoid the extra radiation when possible. 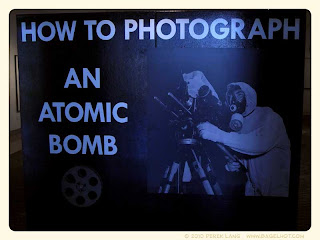 One of the rooms is dedicated to bomb photography 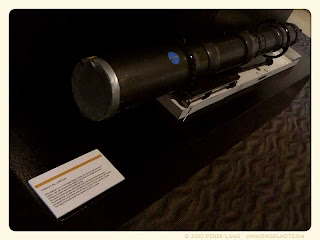 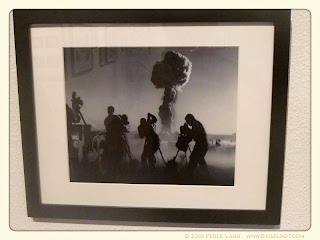 Type of photographic that looks great but I wouldn't want to do.

Of all the information I walked away with, and there's quite a bit of info on atomic testing in that place, was that some of the tests were named after cheeses. Yes, cheese. Granted there were some other interesting tidbits.

The picture that popped into my head, when reading the little blurb about the cheese, was some guy in a lab coat trying to come up with a name and looking down at his half eaten sandwich that his colleague picked up from the sandwich truck outside. Squishing the cellophane wrapper in is left hand to pinch the sandwich bread apart and using his right index finger (cause he's right handed and holding a pen while jotting down bomb notes on a clipboard attached to a concrete wall) , he looks down at the bite he's made revealing the slice of mozzarella. The light bulb goes off the test is named after cheese. 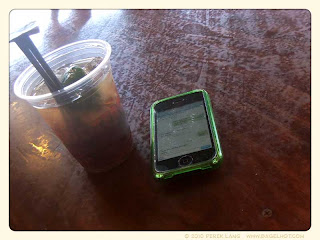 Back at the Hooters pool

I was dropped off back at the hotel where I said good bye to my new friends from Minnesota then having a few hours before my late 6pm check out I went to the pool to cash in some of my coupons for free drinks. The coupons came with the hotel room as part of a summer special. They were only good between 4 and 7, this was the earliest I think I was at the pool all week. 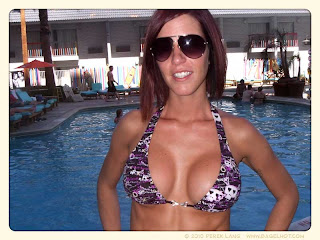 Holy crap, the asian gene didn't help with the amount of booze in my system. After two rum and cokes my head was wobbling. I made my way back to my room where I started to pack. I ended up crashing on my bed for a power nap instead.

A few hours later I was woken up by a text message from the Dark Passion Play. Her and Bam Bam were lounging in the pool at the Tropicana waiting for their time to check out. I texted back that I'd meet them at their hotel so we could share a cab.

I had a bunch of luggage with me at the Tropicana so I texted them that I'd meet them next to the inside variety store (and some slot machines). When taking out money at casinos from bank machines the fee for the transaction is $4.50. That's pretty expensive unless you're used to taking money out at gentleman clubs. So in order to lessen the blow, instead of taking out money in smaller amounts (eg. $40) several times, I opted to take out a largish amount once or twice. The problem with that is you end up with hundred dollar bills. A large denomination if all you want to buy at a variety store is a pack of gum or a bottle of water.

To break up the money and to enjoy the vegas experience I decided I'd spend $10 on the slot machines. I love watching how they work. I sat in front of a machine reading the odds and seeing how it was played. At that point I had found $5 in my pants pocket that I forgot about. I played that and won $12 (that's $7 up). 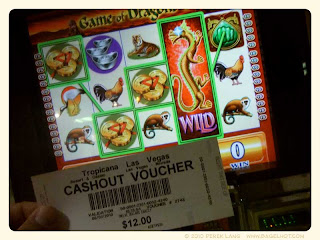 Machines in the newer casinos do not give you back cash. Instead you get a ticket of the winnings. You can cash that into a machine for actual money or bring it to the cashier desk at the casino and they'll do the same thing. I didn't do that though. Even though I had enough money for my drink I popped that little piece of paper into a pirate machine. 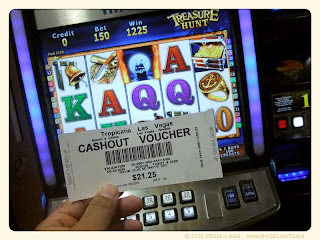 I lost the first round then played a second time (I had a good feeling) and viola, I won again. Now up by $16.25. I cashed the ticket got some water and chips looked at my watch and was still gong to have to burn some time waiting for the girls.

I remembered that I wanted to get some smaller bills from the 100 I had in my wallet. It would be for airplane food and maybe some Tylenol. My tooth was beginning to bug me again. I lost twice, a total of $6. Since my limit that I set for myself was $10 I tried once more with the maximum $3 bet.

All these kinds showed up on the screen (was that a good thing? I didn't read the game instructions on this one). The words 'big win' showed up and the number counter on the bottom right corner started increasing like crazy. 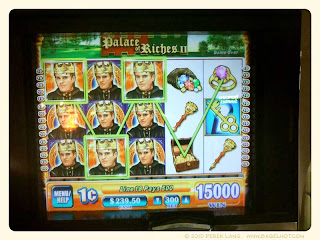 Turned out I had won $150. The Hammer City girls showed up just after I cashed my ticket. Good timing. We got a taxi and headed to the airport. 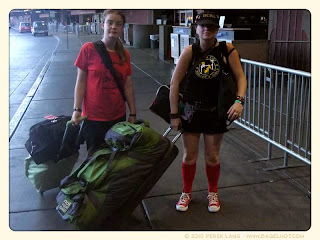 It should be noted that you shouldn't get to an airport more than 3 hours before a flight. We arrived at the McCarran 4 hours early. As international travel goes it helps to get to airports early in general. However you can't check bags in until 3 hours before the flight. We ended up looking for a place to eat in the airport (to no avail) for an hour.

Once we checked in we parted ways. They were flying domestic to buffalo where as I was going to Toronto via the no stop international flight of West Jet.

To get to the boarding gate you have to wait in a rather long line to get through a bag person scan first. A girl behind me looked terrified. It turned out she got to the airport a bit late and was worried that she would miss her plane. She had 25 minutes to get through the line, get scanned, have her bags scanned, and make her way to the boarding gate. It was going to be close.

A bunch of us in line let her through. Yes, maybe we're a bunch of saps but if you were in the same boat wouldn't you want that kind of help. She was quite appreciative and tore off and soon as she was cleared to get to her gate. 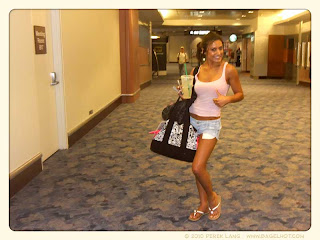 Model near the runway

I passed by her on the way to my gate (which I was still 2.5 hours early for). Since I had time I stopped to figure out what happened. There was something being done to the landing gear on her plane. No one had boarded yet.

Turns out she's a model that had flown to Las Vegas for some photo shoot at one of the hotels. She showed me some of the photos on her iPhone. They were actually not bad as far as swimsuit photos go. I wondered how the whole thing worked for the photographer. Before I could ask her anymore questions the announcement came over the speaker announcing her plane was boarding.

That whole exchange took maybe 15 minutes. I still had over two hours before my flight was going to take off. 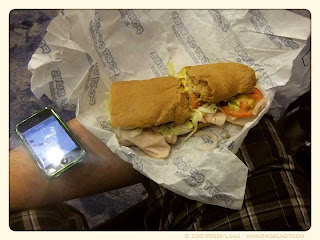 I picked up a sandwich and went to sit down. There was a couple that recognized me from the flight in (a week ago). They were from Collingwood, just outside of Toronto. They were an older couple that had come to Vegas for some convention and to see the grand canyon. They had also remembered the girls from Tri-city and Rebel Rock-it from ToRD. It wasn't long before I was telling them some of my roller derby adventures and trying to explain the rules of the new flat track version of the game.

Before we knew it time just ran out and we were boarding the plane.
Posted by BagelHot at 11:00 AM