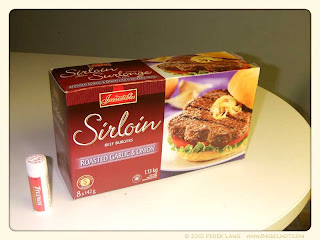 Tylenol for my tooth, Burgers for my stomach

Plane landed this morning and by the time I collected my luggage and got through customs it was 7:15 am (Toronto time - EST). I was tired and wanted to take a taxi home but the ATMs that I found at the airport weren't working. About 30 minutes into my four hour flight home my tooth started to ache. The Tylenol I took wore off. The flight steward didn't have any pain killers. The girl next to me rummaged through her bag trying to find some. It was a nice gesture on her part as I didn't ask her for any.

The pain was like being jabbed in the jaw with a sharp object. I wanted to get home as quick as possible but ended up taking public transit instead. It's just as well. I had arrived during morning rush hour. The taxi probably would have cost me $75. Public transit $2.50.

By 9:00am I got home to collapse into bed. My left tooth was aching still and the pain had spread to my left ear. Maybe it was the change of pressure from the flight but my hearing (out of the left ear) was dulled. Like you had your left side of the head submerged underwater. Whatever the case may be I wanted to sleep. That's when I checked my iPhone messages.

Max, my FAB fashion editor, left me messages that he needed some photos for the next issue. While I was tired I was happy that there was paid work coming in. So I stayed up to sift through files and upload them to my FTP site.

A few hours later I woke up wanting to eat something, something like a hamburger. McDonalds sounded good. The Big Mac is a burger that can be eaten by old ladies with no teeth. Have you ever noticed that? That everything is already chopped up for you? There's no crunching of lettuce or onion? No nasty tomato?

I ended up getting some burger patties from the local grocery store instead. Partially it was a cost saving measure but mainly it was because if I wanted a hamburger again later on I wouldn't have to go back outside. Laziness wins out.
Posted by BagelHot at 7:15 AM