With a dental appointment coming up on friday my main priority today was to take in my shutter faulty D700 to Nikon and have it repaired.

I brought in my D200 as well. It needed a replacement rubber grip. The D700 still had 22 days on the warranty so the repair cost on it was free (yay). The grip for the D200 (which has been long out of warranty) was going to cost me $154.81 (boo). I couldn't get the grip replaced without the repair department cleaning the whole camera. A sensor clean is about $90. Reluctantly I gave in. 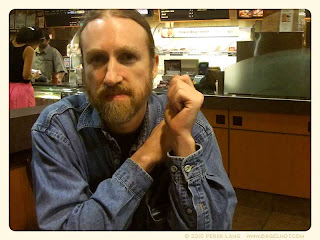 I slept the rest of the day (partially jet lag, partially to deal with my tooth pain) and woke up later to see a showing at the Bloor theatre with Hugh. The movie, "The Disappearance of Alice Creed", was about kidnappers.

While the film played I thought it must have been pretty inexpensive to make (as far as movies go) as there were not a lot of actors (there were 3) and not a lot of locations. The Breakfast Club comes to mind when I think of minimal locations in a movie (the library). Alice Creed was well shot had good writing, good acting, and there were some twists that you might not expect. Not bad for a little movie. 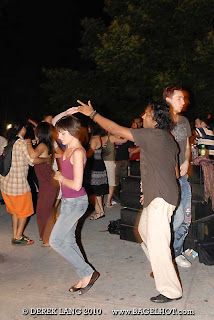 After the movie we noticed a bunch of people salsa dancing at Spadina and University. Turns out it's run by a guy I know from the fashion week photo pit. Ravi told us that it's something that he organizes every thursday night. So if you want to meet new people and have fun dancing this could be your ticket.
Posted by BagelHot at 11:00 PM