Get a haircut ya damn hippie!! 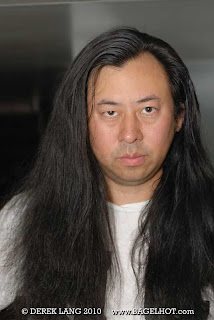 Hair length, the result of about two and a half years.

Originally I thought it was back in November 2008 when I took on a job for Microsoft that my hair started it's growth spree but looking back at this blog I have found evidence that dates the hair growth to an earlier time. It would have been before meeting for dumplings back on June 10, 2008. It's at that time and place where Jup said "You should grow your hair and donate it to locks of love.". My hair was already pretty long, I remember thinking "That's a great idea! How hard can that be?" .

How hard it was

A few weeks after deciding to let my hair grow I woke up one morning and noticed a weight was tugging at my scalp. "What is that on my head? Oh right it's the hair, my hair." This is the first stage indicating that things will start moving downhill from this point on.

Once the hair started to grow past the eyebrows it started poking me in the eyes. This got annoying. You could cut the hair to make bangs but then you might look like a page from the 1700s. There are some people that can make this look work. The people that have jobs working at Medieval Times come to mind. Otherwise this look might come across as "weird" or "strange". Yes, stranger than you having long hair in the first place.

To solve the poking of the eye thing. I wore goggles for a month. I realize having goggles on could get the "weirdo/strange" complement but that's just the way I roll. Wearing goggles can also categorize yourself under geeky if done properly. Plus goggles are actually useful against things exploding coming out of the microwave. 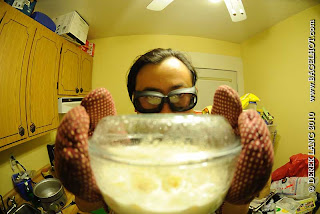 Eventually the hair grows past the eyes and the goggles are no longer needed. There's a short duration of peace before the hair starts getting caught in things. On my way to Fort Wayne I had stuck my head out of the car window in order to take a photograph of the sunset. Having taken the shot I got back into the car and rolled up the window to find my hair stuck. Ugh!

The next stage happens when you're eating a hamburger (or some other food). The burger tastes great, everything seems normal, until you feel the pulling of the hair on your head. Yes, it's the next stage, the one where you start eating your own hair.

Your hair isn't long enough to be pulled back into a pony tail and since hair bands are girlie you resort to the rock star approach, sun glasses. It was on the way to Buffalo following the Montreal derby team that the hair became a major nuisance. I picked up some white sunglasses to alleviate the problem of loose strands in my face.

Once the hair travels past the mouth it then becomes a problem when waking up. Humid days are the worst. You open your eyes to see a net of hair sticking to your face. You wipe your face a few times with your hand trying to move the nuisance out from blocking your vision and it's a few times if your hair has volume.

The next stage is just sitting somewhere like a theatre and finding that the hair has grown down to your lower back. Every time you lean forward with your head (maybe while eating popcorn) your feel the tug of your hair being squished between the chair and your back.

There are times throughout all this that you're thinking "Screw the cancer kid!!! This thing comes off now!!!". You might think for a while and figure you've gone this far you might as well keep going. There's also the odd female that'll say "Ooooh, that hair looks great on you!". SUCKER!! And so the hair continues to grow.

For locks of love the requirement hair length is 10 inches (25.4 cm). There are other places to donate your hair where the length isn't as long. See the Canadian Cancer Society for more hair donation options.


The cutting of the hair

Hot Roller (her name makes sense to me now) is a hair stylist, cutter, and overall amazing person who offered to cut my hair. Being a guy that goes to the barber shop for a quick hair cut I was a bit surprised to get my hair done in a "spa".

Having an appointment for getting my hair cut is pretty foreign to me. I showed up at 11am for my hair cut. I was greeted at the door by Slaughter Laughter who out of her derby outfit looked like an entirely different person. I was expecting to sit somewhere to read a paper or something while I waited. I wasn't expecting to be guided into a seat right away to get my hair washed let alone be offered a beverage.

A beverage? Where the heck am I? I was then asked to pick out of an assortment of different smells (vanilla, sandalwood, some other stuff). I think I was started to freak out a bit. "Just pick a flavour and go with it." I was told.

As the vanilla concoction was massaged into my scalp I realized this was a good thing. So this is what it's like to be pampered? It sure is different from the barber. 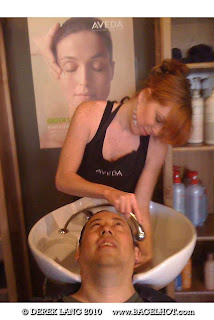 Wow, so this is what it's like to be pampered.

Once the hair was washed I then moved to the hair cutting chair. It was there where Hot Roller worked her cutting magic starting with the lopping off of the 12 inch pony tail. She tied it off with one of my hair elastics then placed it into a ziplock bag that I brought. 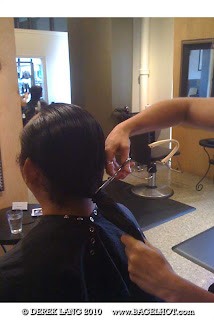 Off with the pony tail

A clip here, a clip there, and viola... The short hair corporate look. Do I miss having long hair? Heck no! Actually it does come in handy when doing the rocker head banger thing playing rock band but other than that no. 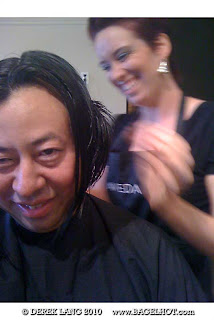 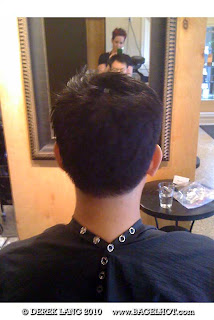 Holy Crap, I can see the back of my neck! 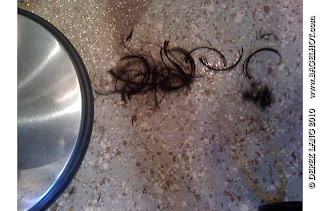 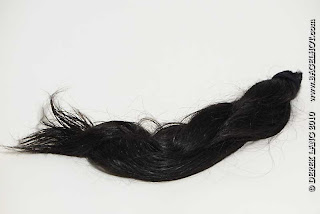 The hair all dried and ready to mail out. 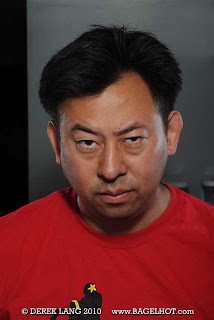 Wow, I was worried that the charity you were doing this for wouldn't be around anymore!

Welcome back to the short hair club!

Loved that you documenting the cutting of your super long hair Derek!